Hey, hey, hey! It's time for a new Weekly Roundup. 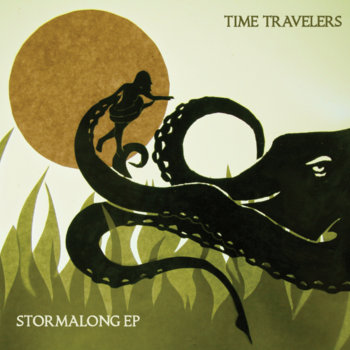 For the first time, I have contributed a piece to another website besides Those Who Dig. The piece is an interview with Brooklyn band Time Travelers and it's available on Greenpointers. Read on for a link, a song, and info about their show this week with Blue & Gold.

Earlier this year, we had several posts connected to the album Story by David Bronson (most prominently an interview he did in association with the 3rd NYC podcast). You may recall that the album was only half of a two-album work that documented a particularly difficult time in David's life. The second, The Long Lost, came out this week. David will be playing a release show tomorrow at Brooklyn Bowl. You should come!

Weekly Roundup had taken a little break, but it's back with some new tunes for you to dig. Check 'em out.

Oliver Lake (b. 1942) is an American jazz musician, composer and poet whose storied career you can read about here. Regardless, on May 21, 2013 he celebrated the release of his second big band album entitled Wheels. This eight track opus is a tour de force of style, compositional prowess, command performances, and outside the box thinking and hearing.

This album caught my attention because of Oliver Lake's deft arrangement of the Outkast song The Whole World. It seemed like such a natural choice for big band interpretation that it's amazing it took this long to happen. However, what I enjoy most about Lake's arrangement isn't just that it's a head melody and then virtuosic blowing across the changes, but rather that the artists go to great lengths to involve the original vocal cadences from the rapped verses. It's an impressive showing of due diligence and one you need to hear.

Check out the track below and then read on for the full album and prerequisit Oliver Lake social media links. You dig?

You may have noticed a lack of posts on my behalf lately. Sorry about that. Been taking a little break to figure some stuff out. I might be rethinking my approach to the blog, but I will still be sharing music and writing one way or another. Anyways, here are some shows to check out this week.

Good morning Dig Nation. There's a ton of interesting things going on this weekend but I'm going to highlight just a few of my favorites going down this weekend. Read on for news, music, and videos pertaining to the weekend that will be. You dig?

Here's a tasty little nugget I've been sitting on for awhile but would like to share with you all this morning. The Beards are an Australian band that writes music exclusively about the virtues of having a beard. Since 2005 they have released three albums entitled The Beards, Beards, Beards, Beards, and finally, Having a Beard is the New Not Having a Beard. The video below is the single from their latest album and is aptly titled Got Me a Beard. It is also hilarious and wonderfully well done by the whole team.

Read on for the complete video credits as well as more beard, and Beards related news. Slower week for shows in NYC, but here are a few you should check out this week.