Happy Halloween! This year, TWD is handing out treats in the form of new songs and videos you should check out via this latest Weekly Roundup. Enjoy!

On Thursday night, I watched an exciting performance by the White Arrows (along with the Chain Gang of 1974 and The Naked and Famous) at Webster Hall. I got to talk with lead vocalist/guitarist Mickey and keyboardist/vocalist Andrew beforehand, too. Read on for more show details and the interview.

Also, a quick FYI: The band is playing TONIGHT (October 30th), again at Webster Hall, but this time it's a headlining gig at the Studio. It's $10 and begins at 7:00 PM. More info here.

Tom Waits is one of favorite musical artists of all time and, in any genre. I would put him on a short list with Johnny Cash, Bob Dylan, Keith Jarrett, The Assad Brothers and a few others. But that is a blog for another time.

Something New: By now it's not breaking news that Tom Waits released a new album this week entitled Bad As Me. But if you're holding out on purchasing it, just stop it. What are you waiting for? We all know that Tom Waits has been putting out a consistantly quality product since the early 70's, and Bad As Me is no exception. The album snarles, moans, hisses, and croons. Bad As Me is badass.

Something Old: As an obsessive Tom Waits fan I was appalled to learn this week that I've missed a beat. What I learned is that in 2008 Tom Waits teamed up with the tour de force string quartet the Kronos Quartet, and bassist Greg Cohen on a collaborative album entitled Healing the Divide: A Concert for Peace and Reconcilliation. This set was live a re-imagining of some Waits classics which are energized and unabashed in their creative display. I actually found myself pounding on my work desk and dancing in my office when I heard this music for the first time. I hope you have the same visercal recation. After all, Tom Waits is ineffably cool.

Tom Waits, Kronos Quartet & Greg Cohen: Down In The Hole

Tomorrow night – 10/27/11 – White Arrows will be performing at Webster Hall in the East Village. This is a great opportunity to see an exciting young band that should put on a good show. Read on for more details.

I interviewed all of the bands at the New Zealand showcase CMJ event last week. This is the third of seven, a talk with Popstrangers.

CMJ: Three little letters, a whole lot of great live music. I had a good time at the events I checked out and, in terms of TWD, I have been really busy trying to get my interview posts up. However, I just couldn't bring myself to skip a Weekly Roundup, especially not when so much good stuff was sent this past week. So let's get to it! 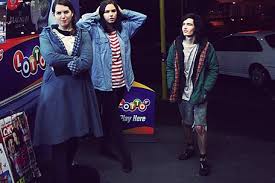 I interviewed all of the bands at the New Zealand showcase CMJ event on October 18. Here's the second of seven, a conversation with Street Chant.

I interviewed all of the bands at the New Zealand showcase CMJ event earlier this week. I'll be posting each one over the next week or so, starting today with the duo Cairo Knife Fight.

Jonny Corndawg is easily one of my favorite artists I've discovered this year. He is an earnst singer/songwritter and a cornicopia of hidden talents. His newest album, Down on the Bikini Line, came out at the tail end of August and after living with it for a couple of months I'm comin' at you today to reccomend it. Your ears will thank me once they've been inflitrated by his quarky sense of humor wrapped up in a healthy dose of country lovin' and smoothered in that special Dawes backing band sauce.

But seriously, I love this album and so will you.

Jonny Corndawg: Life of a Bear

I feel like lately my life has forced me to post nothing but Kickstarter plugs. Oh well, I can find the time to support great causes. Today's recipient is the one and only Caleb Coy, whose Wild Desert Rose absolutely destroyed me and was one of my favorites last year. Somebody just give him all the money he needs so he can get that shit into my hands, stat.