Yesterday, we premiered Jamie Block's music video for "Show You Mine" from his new album White Caps on the Hudson. Today we have a guest post from Jamie called "How We Listen," which nicely connects with our mission.

Sadly, the seminal American composer Elliott Carter died last week in his New York City home; he was 103 years old. In his wake, Carter left an insurmountable number of compositions which earned him not only the accolades of every single significant composer, historian, and scholar of the previous two centuries, but also a Pulitzer prize.

His compositional language was daunting, abstract, highly academic, and sometimes seemed to dare his listeners to explore the outermost regions of their ear's endurance. I loved the music of Elliott Carter for this very reason. Hearing his music for the first time was like having a blanket pulled away from a sound world I never even knew existed. Nevertheless, in my time with TWD I have written only one article regarding Elliott Carter – and the remarkable thing is that it was from this June, when he was still premiering new works.

With this in mind, classical guitarist and friend of the Dig Brian has written a lovely and eloquent piece regarding the life and career of Elliott Carter. Read on for his thoughts as well as a video of Ursula Oppens performing Elliott Carter's Retrouvailles for solo piano. You dig?

Every once in a while I come across a photo that is so mesmerizing all I can do is sit and stare at it. When this happens time seems to stop, I transport myself to that place, imagining what the subjects would have been feeling, thinking, saying. I was lucky enough to have that happen tonight with this photo. When it comes to someone like Jimi Hendrix it is easy to forget that they are a real person, doing real things. Could the soldier playing the drums possibly recognize the greatness that was to come? How could he not?

In his post Jay-Z and the Dixie Chicks, Dave wrote that there are really only three types of music: Classical, Jazz, and Pop. He was saying that the average listener will turn on the radio and hear a diverse array of music from different backgrounds, genres, and styles, but in reality they are all pop music and therefore more similar than dissimilar. This strikes a chord (music pun) with listeners who in someway define themselves by their musical tastes. I'm sure you all know someone who will throw out blanket statements like "I hate country music." or "rap sucks". Dave makes the point that structurally, all this music is similar (the same?) and the differences exist in surface level texture and marketing.

Those Who Dig nation, I need you!

Ok, so here is my Christmas / Hanukkah / Kwanza / non-denominational December gift to the readers of Those Who Dig (and their friends.) I, a graduate of the Penn State film department, am going to create a video power hour. Now I'm not sure if you have ever done a video power hour before; they are amazing. But to ensure that you, the readership of this phenomenal blog, enjoy the pants off this artistic masterpiece I want, scratch that, need your input. In short… 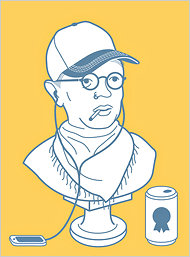 Every once in a while I come across a piece of great writing on the internet. These writings seem to have a way of seeping into my subconscious and replicating below the surface. Days after my initial read I am still thinking about it, going over the subtleties, doing my best to add my own subtext, and generally trying to relate the work to my life in an effort to better myself from it. This writing falls into that category. Not music based per se, but I challenge anyone to read it and not be able to relate it to music in some way. Ladies and gentlemen, I give you, The Hipster in the Mirror.

I spent two years in Asheville, North Carolina and during that timespan I have many fond memories of people, places, and things. The soundtrack to my time spent in Asheville comes from both the amazing live music scene, and the most amazing public radio station that I have encountered in my life to date, WNCW 88.7

You can listen live to their radio stream through iTunes by clicking here.

What initially attracted me to this radio station was the mountain music. Growing up in Erie, Pennsylvania my only outlet to traditional styled mountain music was the occasional recommendation. WNCW's "Goin' Across the Mountain" program (10:30am to 7pm EST every Saturday) introduced me to more fabulous mountain music than I could keep track of. Every time I would hear the radio in the car I would be frantically writing down artist names and song lyrics (I found out  months later that they have a very user friendly section of their site to help you find a song's information. There is also a Sunday block called "This Old Porch" (2:30pm to 6:30pm EST every Sunday) which features some good ol' fashioned pickin'.

But Goin' Across the Mountain and This Old Porch are only the beginning.

So I have recently relocated to a new city and as a result have been doing some new things.

One is recording music. The musicianship and quality of this recording are not great, the song however is pretty fantastic, it's Waiting for a Squall by Hot Buttered Rum. Worth your time, I promise.

Waiting for a Squall – Ivan Eisenberg

Here's to you Milwaukee…