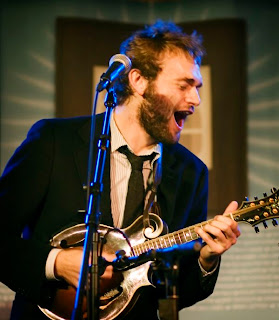 I have been on a kind of obsessive listening binge with the mandolin playing of Chris Thile and I think it's high time I ask the question,

What the hell does he think he's doing?

Let me begin first with a little background information. There was a time when every emotional, social, and cultural function of music was fulfilled with what we now call, Classical Music. This time period is commonly referred to as the 16th – 19th Centuries.

It is an interesting side note that this time span covers

the creation and dissolution of the western tonal system.

Furthermore, the birth of Pop music as we know it today

may have only been possible

because of the tonal breakdown in Classical Music.

What I envy about the culture of the previous centuries was that people did not have the luxury of music listening technology. If they wanted to hear music they were forced to either learn to play, or go to live performances. The best side effect of this was that people had more advanced Musical Memory.

If listening is a privilege, then remembering what you hear is a treasure.

Previous audiences allowed composers to stretch their ideas out over the course of multiple movement works as a means of establishing, developing, and returning to their musical themes and ideas.

With the advent of Pop music in the 20th century, music listening got condensed down into three and a half minute nuggets of sound digestion. Listeners grew complacent, and music essentially became wall paper in the background of your life.

So along comes Chris Thile.

At the age of 29 Chris Thile has already marqueed his name onto 16 different albums as a solo artist, and cornerstone component in the ensembles Nickel Creek, and most recently the Punch Brothers. His Virtuosity as a mandolin player puts him in the top tier of all musicians regardless of genre label, and moreover, the Punch Brothers have signed with the prestigious record label, Nonesuch. Other notable artists who have shared this record label include:

To name a few.

In addition, The Punch Brothers first release contained a physically, mentally, and compositionally ambitious forty minute work in four movements entitled, The Blind Leaving The Blind. All of this again begs the question, Who is this guy, and what the hell does he think he's doing?

It is my opinion that only remaining genre barriers are:

At a jazz concert you applaud after solos.

At a classical concert you applaud after the final movement.

At a pop concert you applaud whenever you want.

The entire oeuvre of Chris Thile's work can be labeled as bluegrass/folk music. However, I see his career as an opportunity to change listener's perceptions about genre titles, and expand long range listening habits.

As for me, I have been impacted by Chris Thile in that I now have a daily practice routine on my mandolin, and that I am hopeful, optimistic, and excited to see what's next.