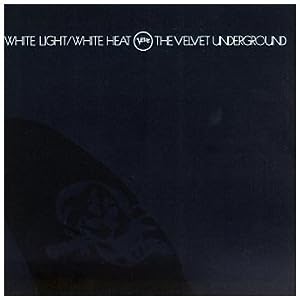 Velvet Underground Month enters Week 2 with a look at White Light / White Heat, an album that finds the band pursuing the extremes of their sound.

If you just released an incredible debut album that was innovative and compelling, hip, urban, and poetic, and just an all-around great listen, what would you do for the follow up? If you're the Velvet Underground, you would fire your manager, Andy Warhol – who just so happened to be a luminary of the art world and society at large, not exactly a lightweight – and part ways with Nico – whose distinct voice was a key ingredient of the album's recipe. This brings you back to your original, core lineup. Then you decide to throw caution to the wind and become even more experimental.

As you might expect, White Light / White Heat is a more difficult record to immerse one's self in, which is saying something considering the challenging elements of The Velvet Underground & Nico. It's a bit of a startling change in roughly one year's time, but it's not so far removed that it's utterly foreign. I doubt it was intentional, but the culmination of the first album – "The Black Angel's Death Song" and "European Son" – proved to be a good segue to the second album. Like these two songs, the six song on White Light / White Heat tell odd stories and are noisy and confrontational. They sound raw and loose. It's essentially the more extreme, "in the red," and unpolished version of what came before.

I love the way this album starts. The title track is killer, a tight, energetic rock song; with the piano, it's like a kicked up version of "I'm Waiting for the Man." Almost like the buyer is now in the midst of use. Interestingly, it feels in medias res, like there were several minutes of recording cut off before the moment we hear. It's also very attentive to form. The call goes White Light-White Light-White Heat-White Light, and the music echoes this AABA pattern. Then, each line of the verses is similar from one stanza to the next, talking about brain/mind in line 1, a sensory change in line 2, "tickle down to the toes" in line 3 (an interesting change from head to toe, like the change from light to heat or the chord change), and the "goodness knows" bit in line 4. Despite all of this, one can tell from Lou's ragged, energetic delivery and the extra level of fuzz that the band is letting it rip. Things get out of control at the end when the bass takes over. If songs like "Heroin" and "Run Run Run" were objective or ambivalent or even warning about drug use, "White Light / White Heat" is supposed to be more of an all-out endorsement.

For those thinking "This isn't that different," after the first track, hearing "The Gift" next should end that sentiment. I often like thinking of songs as short stories, but this IS literally a short story being read to music. Based on the way it is mixed, you can even listen to just the story or just the music – pop out one ear bud at a time, or mix things all right or all left. This is John Cale's first time in the spotlight on vocals and having him read was an excellent decision. His accented voice and cadence give just the right edge of detached creepiness, and also humor. He tells the story of a young man named Waldo Jeffers who is home on summer break from college. He wonders about his girlfriend Marsha's fidelity, so he mails himself to Wisconsin to see her. I won't give away the ending but it is horrifying. I hear this as a sort of modern fable, a cautionary tale about being too naive. Musically, the rest of the band provides a rhythmic groove, it matches pretty well.

It only gets weirder with "Lady Godiva's Operation," a song about a botched lobotomy of what may or may not be an actual lady. I feel the antecedent here is "Venus In Furs," but this is a little more spacey, almost with an Eastern vibe to it. It also has a more avant-garde feel with how John and Lou's voices cut in between each other without trying to sound clean, and how they start inflecting weirdly or "performing" the lyrics. And did they get Chewbacca to growl in the middle? I suppose that's not possible since it predates Star Wars by nearly a decade, but that's always what I think when I hear it.

"Here She Comes Now" feels like the song that would most easily fit on the first album. Apparently it was originally written for Nico to sing, so that could be part of it. Also, one can't help but think of "There She Goes Again" based on the titles, and it does have the sort of pop, jangly guitar at times, especially at the "Ah, it looks so good" part. However, this song is much more drone-y. As is common throughout the album, Lou really stretches his voice to attack his words. Here, he starts a sort of stutter/stammer. "Here She Comes Now" is also more vague. Is it anticipation of an actual arrival? Or is it sexual? Or is it about a guitar of Lou's known as the Ostrich?

By the time we reach "I Heard Her Call My Name" the band is deconstructing their typical sound full on. This track features spastic, crazy guitar work, and it doesn't even sound like members are playing in sync with each other or a standard beat. It's like a page out of the "European Son" playbook, ripped up, thrown out, and repieced together like a Cubist collage. Lou's vocal gymnastics are in full effect, spitting out almost pure onomatopoeia as the song starts. And for whatever reason, the band chooses to repeat the whole performance of the original verse and chorus a second time around. This seems more challenging of musical convention than anything we heard previously on the first album.

It proves to be just a warm up for the epic album closer "Sister Ray." This track twists and turns, pushing sound to its furthest limits as Lou tells a tale of debauchery and murder, his "singing" devolving with each progressing verse. Between this content, style, and length – 17 and a half minutes – it is certainly a contender for the title of the musical equivalent of Ulysses. I admit to finding it quite daunting the first several listens, but I came to dig it. I especially love the first few minutes driven by the organ and drums. My appreciation was cemented when I found out this was recorded live in only one take! Perhaps the definitive representation of the original four piece lineup at the peak of their powers. Though one of their most challenging cuts, it is also a breathtaking example of their unadulterated vision. I intend to write a post solely devoted to breaking down the song in detail, but suffice it to say, this is a hell of a track.

When I think about the transition from the first album to this one, I can't help thinking about the lack of outside influences from not having Andy Warhol or Nico involved, leaving the band more free. Allegedly the split with Warhol was over disappointment in the poor sales of the album. It seems odd, then, to consider that the band went in a much more abrasive and less commercial friendly direction. It may have been a gesture of bitter defiance. Or, it could be as simple as 1967 to 1968. 1968 was a year of widespread international revolution and social upheaval, and when you add in the craziness in the band's life – it's not a coincidence a lot of this album references amphetamines frequently – the most apt word to describe the proceedings is chaos.

White Light / White Heat is the band becoming further unshackled and submitting to chaos. Seeing how far down the rabbit hole goes. It's a journey worth taking.

You can buy the album here and here.