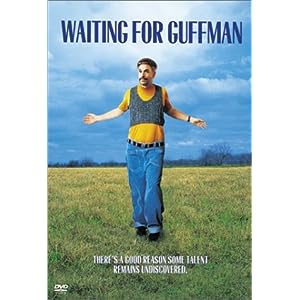 Tonight I'm posting the second installment in a series of three devoted to the music-based films of Christopher Guest & company: This is Spinal Tap (1980s heavy metal), Waiting for Guffman (stage musical), and A Mighty Wind (1950s/1960s folk). They are some of my favorite movies, and with music so funny and so well done, I thought they'd be great for further discussion as part of the Scenes & Songs feature. Come me with on a journey to the heart of America – Blaine, Missouri.

I realize that this one could be more of a stretch than A Mighty Wind and Spinal Tap are when it comes to being a worthy of a post on a music blog. But if you really think that, then I might be forced to call you bastard people and then go home and bite my pillow. In seriousness though, I am willing to extend myself a bit here because this is one of my all-time favorite movies. Everyone is masterful in it, it's both incredibly hilarious and incredibly creative, and truly an inspiration and a pleasure to watch. And while it may not be devoted to a specific genre of music, it is about a musical production and involves song, dance, and performance. So let's get to it. Or as Corky St. Clair might say, "Everybody dance!"

Similar to the big tribute concert that serves as the culmination of A Mighty Wind, this film centers upon a ragtag community theater group as they prepare for a performance at the fictitious town of Blaine, Missouri's sesquicentennial (that's the 150) celebration. The play is called "Red, White, and Blaine," and it highlights the pivotal events of Blaine's history. It is the brainchild of the eccentric artist Corky St. Clair (truly an amazing performance by Christopher Guest). The performers include Eugene Levy as Dr. Allan Pearl (not the class clown, but he sat next to him), Fred Willard and Catherine O'Hara as Ron & Shelia Albertson (travel agents who have never been out of Blaine…except once, for medical reasons…and mainstays of Corky's productions), and Parker Posey as Libby Mae "It is the day of the show, y'all!" Brown ("DQ" would also have been an appropriate epithet). The title is an allusion to the classic play "Waiting for Godot," and the film does mirror the main conceit of that work.

What I love about this film is that it absolutely nails the amateurishness and silliness of community theater, while at the same time also capturing its sheer joy and transformative power. Corky may be a clueless Broadway washout with an overinflated ego, and his "talent" can't really sing or act, but that doesn't mean they can't put on a hell of a show nor capture the civic pride, imagination, and hearts (just witness Councilman Steve Sark's rapturous shouts of "Corky" as the play closes) of their audience. It is laugh out loud absurd quite often but also rousing in its own way.

Another duality that I find fascinating is the ability of this gifted cast to tap into "bad" acting. Things like stiff delivery of lines, singing off-key, and so forth. It seems like there is almost a higher degree of difficulty to do this successfully when the ensemble has serious chops like this one has. One of the best examples of this, certainly one of the earliest, is the audition scene. I could only find an excerpted version (and fyi, the first two guys aren't even in the play), but it should give an adequate impression to those who haven't seen the film – and hopefully encourage you to see it, it's worth it! I think the Eugene Levy / Dr. Pearl moment shows this good bad acting best. He has such a flat, faltering closing note, as one might expect from a dentist who has never performed before. And yet, Corky is blown away, a detail I love.

The film's early scenes describe the town's history and foreshadow the scenes of the play. Before the show, though, viewers experience the occasional highs and frequent lows of the efforts expended in putting one on. We see the cast learning to sing and dance and their happiness that they may get to make Broadway if they can wow Jewish theater impresario Mort Guffman at their performance. But we also see arguments about creative differences (to which Corky says "It's Zen, like how many babies can you fit in the tire, you know, that old joke), Corky walking out when his desired funding can't be acquired, and a cast member bailing on the show (leading to the Corky classic "Well then I just hate you and I hate your ass face!"). I like how we get a humorous but nevertheless somewhat realistic look at the creative and collaborative process.

Then there's the show itself. There are five main songs that span the 150 years of Blaine's history. Just like in a real play, the overture gives a snippet of each song – and introduces us to the versatile trumpet player who also handles timpani and xylophone when needed. I have often thought about Sufjan Stevens when I hear all of this music, for both the place-based subject matter and the musical delivery, particularly all the woodwinds. And Sufjan's affinity for theater is documented. Maybe he's a fan of this film? Anyways, things begin with "Covered Wagons," which commemorates the founding of the town. This happened in the 1840s, when town patriarch and namesake Blaine Fabin mistook the Mississippi for the Pacific coast. The song is a square dance / hoedown type number. Watch for Fred Willard's guns as he skips.

The next pivotal moment in the town's history was a visit by President McKinley, who became enamored with the town's excellent footstools. This leads to the rise of manufacturing and growth for Blaine (historically faithful for similar areas, in general concept), memorialized in the wacky tune "Stool Boom." The choreography is very angular and mechanical and I think it, the repetition of phrases like "working, making," and exhaustion that eventually set in capture the monotonous nature of factory work. I may not go as far as calling it social commentary, but I will say it is a catchy number. See for yourself below and be sure to check out the musical director's unorthodox conducting methods.

From there, it moves ahead to the World War II. I particularly love how Corky filling in for the cast member who quit leads to the most chemistry-less ballad ever performed. It's called "Penny for Your Thoughts," and seems in part to be a send-up of how musicals often have lyrics that sometimes take symbolism to ridiculous lengths. After the detente of war, the next major event in Blaine's history was alien abduction. Watch below:

Now, it's not an entirely apt comparison, but this song always reminds me of "Nothing Ever Happens" by Pavement. Have a listen and see what you think:

Pavement – Nothing Ever Happens

I won't spoil the ending for you, just go see the film. Or rewatch it if you have seen it. It really is great. Humorous and clever, I recommend it heartily. I think it offers an interesting portrayal of community theater and small town America. The musical talent, evident in both the writing and performances, is quite vivid. It really knocks me out that this group can get so into the mindset of what they are channeling in such authentic ways and still bring out plenty of laughs. Really amazing. Most of all, I love how the film connects a group of people striving to accomplish something to a celebration (and even pride in the American spirit), because people coming together, offering their gifts, and creating something bigger than any one of them is always worth celebrating, in whatever form. Isn't that what theater is all about?

What are your favorite moments and lines of this film? Let me know what you think in the comments below.

Also, start wandering around shouting "Hello Cleveland!" to get ready for the final installment, a look at Spinal Tap.