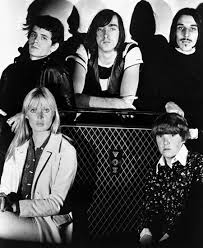 Hello readers. I hope you're ready for something new that happens to be old because we're about to try something a little different. Starting tomorrow, we will begin about a month of content devoted to the Velvet Underground.

As some of you may know, I recently moved to New York City. You probably don't know that I like to get music considered "classic" within the rock & roll tradition to listen to over the summer each year. These two things have come together and led to me listening to a lot of the Velvet Underground lately. Add in the fact that I also am really fascinated by the idea of a career arc, of what happens to a band over time, and it seemed like I should write about the band for Those Who Dig in an in-depth way. So that's what I'm going to do, and I think Dave and Kyle will be joining me.

My plan is to do a post on each of their four studio albums (that is, the ones made with Lou Reed in the lineup) every Thursday starting tomorrow through September 1. Then, on a daily basis, or close to it, between these explorations there will be shorter posts that explore tangents related to the band, the music, the scene, and so forth. This will in no way preclude us from posting on other great music like normal; we aren't suddenly going to a Velvet Underground-only approach. Just expect to see a lot on them over the next month. Maybe it'll be cool, maybe it won't, but I am excited to see what happens. Hope you are too.

Things kick off tomorrow with a post on The Velvet Underground & Nico. To get ready, check out this video for "I'm Waiting for the Man." It's footage of the band rehearsing shot by Andy Warhol.