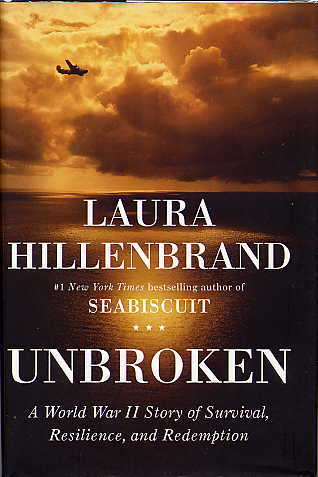 Tonight I'm starting a new feature at Those Who Dig called This Book Is A Song. I have always loved literature and reading and I decided it would be fun to look at the connections to music. The idea is to share some thoughts about books I read and match them up with relevant songs.

I just read Unbroken: A World War II Story of Survival, Resilience, and Redemption by Laura Hillenbrand, who wrote Seabiscuit. This was not something on my radar, but my grandfather and uncle both read it and loved it, and my grandpa was particularly insistent that I check it out. I am glad I did. Simply put, it's an incredible story, centered upon the seemingly unbelievable life of Louis Zamperini. While Louie first became prominent as a runner – he was the fastest high school runner ever in the 1930s and ran for the US national team at the 1936 Olympics in Berlin – Unbroken is mostly about his experiences during World War II.

A single one of the experiences I'm about to outline might be more than most men could handle, so taken together, it is truly mind-boggling to learn about Louie's life. He was in the Air Force, a bombardier on a B-24, and in brief, the ordeals he experienced are: an attack by Japanese Zeros that left 594 bullet holes in the plane, damaging it beyond repair but leaving him relatively unscathed, a retaliatory bombing by the Japanese after a successful American mission in which his tent was hit square on approximately thirty seconds after he left it, a horrific plane crash in the middle of the Pacific, subsequent survival at sea with next to no provisions or supplies for forty-seven days, only to end up in Japanese POW camps for two-and-a-half years in deplorable conditions under guards whose brutality and cruelty knew no bounds.

It is a riveting account of survival, and there were two main takeaways for me. First, I have had my struggles of late with making some big changes in my life, but this really put things in perspective. More significantly was experiencing Louie's unbridled optimism and will to live. This book makes it abundantly clear that the mental aspect was critical, I would say even more than the physical. Louie never gave in to the notion that he would die or that he would not find a way to get to another day. This was awe-inducing on the raft and basically moved me to tears in the camps.

I can't think of much that would be more difficult than what Louie and the other POWs went through at the hands of their Japanese captors. One guard known as "The Bird" was unbelievably and reprehensibly sadistic. He was intent on breaking Louie's spirit most of all. While he tormented his waking hours and even his dreams, Louie never broke.

The perfect song to match to this book is "Rappaport's Testament: I Never Gave Up." I'm sharing the Ted Leo version, which is the one I know, but it is a cover of Chumbawamba. The lyrics were inspired by the writings of Primo Levi, a famous concentration camp survivor. It's a difference of place / theater of war, but otherwise essentially the same narrative; a line like, "Hitler never ever got the better of me," is akin to Louie and the Bird. One could put other lyrics, such as "I learned to snatch whatever I could," or "I'll spit this precious soup in his face," into Unbroken quite easily to describe the mindset of Louie and his fellow POWs.

Hillenbrand stresses that of the utmost importance to survival was dignity. At the camps, most of the Japanese and the Germans debased their prisoners, treating them inhumanely. It was not easy to maintain dignity when they were being starved or when their ailments went untreated, much less when they were beaten or forced to do things like clean the human waste out of the facilities – often after being shoved down into it. The rousing finale of the song ties into this exact notion: "I never gave up! I never gave up! I crawled in the mud but I never gave up!" You can't hear the song – or read the book – and not feel at least a little moved.

World War II brought out the worst in humanity – on all sides – but in other ways, ways often directly related to these worst bits, it brought out the best, which is why it still resonates strongly today. As Unbroken and "Rappaport's Testament," show, there is nothing more transcendent and stirring than the triumph of the human spirit. This song has always made me want to take charge of my life in moments of difficulty, malaise, or confusion. This tremendous book sparked the same feelings to an even greater degree. It is good to be reminded that no matter what we face, we have the strength within us to fight through. Never give up.