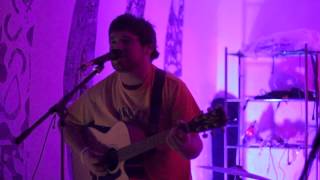 We had our first "Those Who Dig presents" last week at Muchmore's. It was a great night! Thanks to all those who attended. We'll have a full recap with photos coming soon, but I wanted to share some videos of the evening's first performance by David Pollack.

David started the night in style, playing a selection of tunes from his forthcoming album, older cuts, and a pair of awesome covers. He had a friend filming his set, and we're excited to share some clips here. Here's one of a new song called "What Do I Do?"

David played most his set solo acoustic but he was joined for his last song by Callison Stratton. The two did a lovely duet of Ryan Adams' "Winding Wheel." Check it out!

You can view more videos of the performance by checking out David's Youtube channel here. Look for plenty of photos and information about the show soon.

Also, for those who will be in NYC over Thanksgiving, David is a great performer and you should go see him when he plays Friday 11/23 at The Yippie! Museum at 9 Bleecker Street. He goes on at 9:00 PM – playing as David Pollack & The Family – and there are six other acts on the bill, playing from 6:00PM to 1:00AM. It's $5 and all ages. More details here.