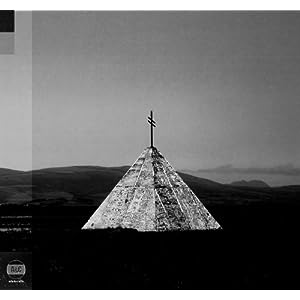 *I am also going to include the 7" single for "Black Water" that was released exclusively with album pre-orders in this write-up. Info in ( ).

Timber Timbre is a Canadian trio and Creep On Creepin' On is their fourth album – second with Arts & Crafts (they previously released the self-titled Timber Timbre in 2009). The album also features significant contributions from Mathieu Charbonneau on piano, Colin Stetson on saxophones, and Katherine Peacock on accordion. It is particularly difficult to imagine this work being as good or interesting without these performances, so I wanted to be sure to recognize them. The guests and the main three-piece of the band (pronounced "tim-bur tam-bur" if you didn't already know) have created a stunning collection of music that is dark and engrossing.

I think of this album as teetering between two poles: there is the traditional "song" based element featuring pop structures in repetitive patterns and vocals, and then the purely instrumental, which is atmospheric and meandering. Three tracks are exclusively instrumental, several others are more standard songs, and then of course a few merge the two. Overall, there is much cohesion in tone among the ten tracks. I know this isn't the first time I've compared something to a film score, but Timber Timbre's work feels like something out of a movie, like a horror or noir that is couched in the ostensibly familiar but ultimately unsettling. Or something darkly comedic. I kept thinking about Tim Burton, David Lynch might be appropriate too, and there are other good comparisons I'll be using later on too.

Though I cannot prove this with my limited ear, I suspect the music is in the same key or even uses the same notes. Maybe that's not true, but each song does feel similarly constructed: piano chords, a prominent bass line, and steady drums. Things are shaded by the extra instruments, and the tempos vary (I'd say they are more slow than not), but I know it took me a few listens to get comfortable sorting each one from the others. I do like that process of experiencing the overall vibe for awhile before starting to become aware of the qualities of the component songs; the focus gradually sharpening. The music evokes old-timey AM radio; it feels like blues, jazz, and more from a forgotten era.

And then there's that voice. Taylor Kirk is the singer in the band, and what his vocal chords bring to the mix is certainly a big part of Timber Timbre's overall aesthetic. His voice is quite unique, a cocktail of equal parts M. Ward, Antony Hegarty, and Jerry Lee Lewis. Whether it is true to life or not, the voice is one of a man struggling against his darker nature, often giving in to it, and then dealing with the consequences. This lends heightened stakes to a song like "Do I Have Power?" which explores this very notion. It feels very much like the Werewolf before the full moon (and I love how the instrumental "Souveniers" seems to imply that he was overtaken). Also, when Taylor sings "I've done some truly awful things, you have every reason to be frightened," on "Lonesome Hunter," you believe it! However, while a lot of the words are off-putting and sinister, they rarely boldly confront, instead often sleepily sneak up on a listener. It's very much like the poppy field in The Wizard of Oz. The album is aptly named, for the image of a creep or creeping is both a literal recurrence and a good descriptor of the overall sensory aspects of listening.

I hope I am not giving the wrong impression of the album's quality, because Creep On Creepin' On is really great. It is certainly not without humor, for one thing. Songs like "Black Water," and "Bad Ritual" may be languid and haunting but they have a way of getting in my head and I haven't minded once. "Too Old To Die Young" brings a little shuffle and some female harmonies, and I can't help feeling it would be the perfect background to an old school "Silly Symphony" cartoon. I found the instrumentals to be interesting and have their own stories. I kept thinking "Souveniers" would have been a great opening track because it ends with you left expecting more, but then I realized it could very well be a brilliant move to get you start listening to the whole album all over again. It worked on me.

This album is obviously the most distinct of all the Arts & Crafts releases I've profiled so far. I don't really think there's any strong musical comparison but that this actually represents a selection for geographic reasons – Timber Timbre being based in Toronto, like the label. I am very glad this is on Arts & Crafts and I understand why they would have wanted to release it. Obviously anyone can come to this album and enjoy it, but I do think there is a little enhancement to being familiar with the label and being taken aback by how different this is. Like tasting an exotic food for the first time, it makes you more intrigued to taste more because it's beyond your usual palette. But regardless, it is a great album. I dig how it has created its own world, and while it's one that feels different from my life, I was very happy to experience it.

This album came with a 7" record of "Black Water" paired with the song "Dusty Gentle Creature" by Ferriswheel when pre-ordered in advance of the official release date. Very cool incentive. Ferriswheel features Mathieu Charbonneau. Their instrumental track is a good match. It's a little more polished, but has a similar spooky quality to it and very beautiful piano work. I'm not sure it comes free with ordering Creep On Creepin' On any longer, but you can buy it here. You can get the Timber Timbre album here (Amazon and iTunes). The album comes in black, green, or purple art. I ended up with the green version.

Here's the video for another album cut "Woman" (one of those hybrid tracks of "song" and instrumental) and read on for what's coming next and for links to the other installments: