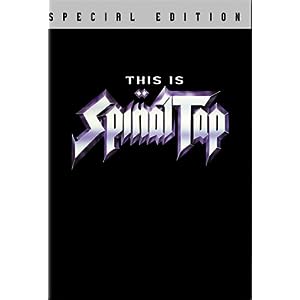 Tonight I'm posting the third and final installment in a series of three devoted to the music-based films of Christopher Guest & company: This is Spinal Tap (1980s heavy metal), Waiting for Guffman (stage musical), and A Mighty Wind (1950s/1960s folk). They are some of my favorite movies, and with music so funny and so well done, I thought they'd be great for further discussion as part of the Scenes & Songs feature. This one goes to 11!

First things first, this film is a bit different than the other two as far as cast & crew goes. One can think of it as the predecessor. It came out in 1984, more than a decade before the run of films that began with Waiting for Guffman and currently stands at For Your Consideration, and was directed not by Guest, but Rob Reiner. It doesn't quite have the full ensemble either. But the viewing experience reveals these are minor points, as the film sits comfortably and hilariously with the later works of the Guest team.

I may admit to liking Waiting for Guffman more as an overall favorite film, but in this series, This is Spinal Tap is the pinnacle for the musical mockumentary – a genre it basically created! Heavy metal was much riper for satire than folk music ever could have been, if for no other reason than the effect of the time difference between the 1950s and 1960s and 2003 when A Mighty Wind was released. Spinal Tap, on the other hand, was mocking its present era, thus hitting a desirable target at the perfect time. To me, the humor still stands – maybe because of seeing countless episodes of Behind the Music – and just like the other films I previously discussed, the music also sounds dead on, and it sounds damn good. Like "Tonight I'm Going to Rock it Tonight."

No, that title does not contain any typos, it is rather a spoof on the blunt and redundant nature of a lot of metal songs titles and lyrics. And besides making you chuckle, you can tell instantly from the guitar riffs and solos that the Tap ain't messin' around. The band features Christopher Guest as Nigel Tufnel, lead guitarist and vocals, Michael McKean as David St. Hubbins, guitarist and lead vocals, and Harry Shearer as Derek Smalls, bassist and vocals. They also have a keyboardist named Viv Savage (who wears some outrageous costumes) and a drummer by the name of Mick Shrimpton.

Now, Shrimpton just happens to be the latest drummer for Spinal Tap as they embark on their comeback American tour in support of their latest (15th!) album Smell the Glove. Filmmaker Marti DiBergi is along to document it (played by Reiner) and in his interviews with the band on their past reveal that no Spinal Tap drummer has lasted long, which is one of the films now-classic running gags. The lineup includes Stumpy Pete (died in a bizarre gardening accident), Stumpy Joe (choked on vomit…but whose?! You can't exactly dust for vomit), and Peter James Bond (spontaneous combustion).

The problem with writing about This is Spinal Tap is the potential for things to devolve to me just quoting the entire movie. There are so many memorable scenes that have become part of the pop culture pantheon. The gist of the story is that the band is washed up and doesn't know it, there are plenty of tour debacles (does it get any better than a performance of the band's Druid epic "Stonehenge" when the titular prop ends up being a 18 inches instead of 18 feet and in danger of being trampled by dwarves?!), and a heated relationship between Nigel and David that is very Lennon-McCartneyesque: old mates who perfectly complement each other but start butting heads when a Yoko Ono-like girlfriend brings disharmony to the proceedings.

What's really great about this movie is how it takes a tale told (and lived) thousands and thousands of times over and puts its own spin on it. Or maybe a better way of characterizing it is how it takes common elements to absurd, uniquely detailed ends. It's all believable in premise but wacky when you think about the execution. Yet it never feels too fake, I don't think. Each performer totally owns their role. Here's a classic scene that I can't help sharing:

I was stunned when I initially learned that Nigel Tufnel and Corky St. Clair (Guest's Waiting for Guffman character) are played by the same person. But this group of individuals is so talented and has such diverse interests, they can pull it off. Another thing I really enjoy is how the humor in this ranges from subtle to broad. There are all kinds of one-liners that don't get any fanfare. For instance, manager Ian Faith saying not to worry about missing the Boston show because "It's not a college town," or the sight gag of Tap album IntraVenus De Milo. These are more witty and sly. But this is also a movie that features this song:

"Big Bottom" is about as subtle as a sledgehammer. And yet it goes beyond the lyrics with the absurd notion that all three members are playing bass! Including a double neck bass. The bass is considered the "low end" or the "bottom of the mix" so it actually makes sense to a degree, but it is also visually amusing and aurally interesting. Not bad for a song about a woman's behind.

Yes, This is Spinal Tap is truly a must watch for any fan of music or humor. I have left out countless great moments and there are several other good songs to hear throughout. Feel free to share some of your favorites in the comments below. I cannot recommend that you watch or rewatch this great film strongly enough. Sadly, that concludes my brief series on the music-related wonderful works of Christopher Guest and company. They are major favorites of mine, and I definitely enjoyed writing about them. I hope you dig the write-ups and the films too!