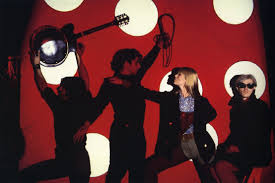 Velvet Underground Month is just about over. I'm doing a few last posts this week to wrap things up, starting with some stuff I missed or forgot to include in previous posts.

From The Velvet Underground & Nico, I found some cool covers, but there is a great cover of "Femme Fatale" from earlier this summer by Feist with Nigel Godrich and Colin Greenwood that is quite amazing which was not present in my post. Check it out now:

I didn't include any use of songs from The Velvet Underground & Nico in film, only literature and live representations. But I had forgotten all about the scene from Last Days that prominently features "Venus in Furs." It makes the movie even more haunting.

The White Light / White Heat era was a raucous one for the band. Though it is captured well on record, particularly with "Sister Ray," it is fascinating to hear the songs in a live setting. The clips below do not have performance footage, but are worth a listen. One is "White Light / White Heat" and the other is "Sister Ray," both from 1969. Also, both got extended into epic rock outs.

I am not entirely sure if the song below contains a sample of "Pale Blue Eyes," but I feel confident that it most likely does. I might need some expert ears to confirm (or dis-confirm – got the reference?) this. Anyways, the tune is called "The Star" from the great mixtape The Mixtape About Nothing by rapper Wale. Quick tangent, this is really a wonderful mixtape. Not only is it Seinfeld-themed – huge props are deserved for that in my book – but it's clever and versatile. Absolutely worth tracking down. I'm kicking myself I didn't put it in the post on covers and connections to The Velvet Underground because it was in my plan all along and I just forgot. You can enjoy it now at least. (PS the "Pale Blue Eyes" part doesn't start right away).

Here's perhaps a looser connection to Loaded than some of the others I included, but definitely an interesting one. On her album Strange Little Girls, Tori Amos covered twelve songs by male musicians, taking on a unique female perspective for each (she took a photograph as each character). Below is her version of the female side of "New Age."

One last thing I wanted to do but didn't was write about the relationship between the Velvet Underground and New York City. As an aspiring urban planner, the presence and evocation of place in music is very interesting to me. Here are a few thoughts I had on this subject:

-Certainly the urban setting of NYC was very significant to the band, and it is particularly fascinating to think about how much has changed since the late 1960s. A song like "Run Run Run" talks about Union Square as a scary place associated with drugs and corruption. In 2011, it's a hub of huge commercial retailers, businesses, transportation connections, and tourists. Not really the same as it was for Marguerita Passion or Beardless Harry.

-"I'm Waiting for the Man" is perhaps the most location-specific of all the tracks, which makes the drug purchase that much more vivid.

-Songs that evoke tragic urban characters include "There She Goes Again," "Cool It Down," and "Oh! Sweet Nuthin'."

-"Rock and Roll" talks about the power of New York radio and "After Hours" seems to glorify the various bars and establishments many city-dwellers would go to.

-It's not surprising Lou would sing of the importance of the city, such as in "Train Round the Bend," but he does acknowledge how it can wear on a person in "Heroin."

-Other songs that to me feel birthed of an urban experience because of the portrayal of characters, sexual behavior, and drugs most likely encountered in an urban setting, include: "Femme Fatale," "Venus in Furs," "All Tomorrow's Parties," "White Light / White Heat," "The Gift," "Lady Godiva's Operation," "Sister Ray," "Candy Says," "Sweet Jane," and "New Age."

-Finally, here's a neat article worth reading if this subject interests you too.