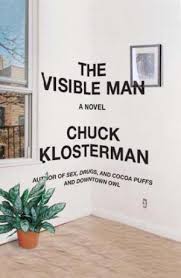 This Book Is A Song is a feature in which we match songs to books we've recently read.

There are probably not too many contemporary writers as perfect for a feature on the intersection of music and books as Chuck Klosterman. He is one of my favorites when it comes to music & pop culture writing and though my style (if I even have one) is nowhere near as interesting or insightful as his, he certainly has been very influential to me. Music is perhaps his most prominent topic of interest, but when reading his work one can expect to encounter thought-provoking and hilarious discussion on film, television, sports, books, current events, and more too.

The Visible Man is Chuck's latest book, his seventh overall and second novel. It tells the story of a therapist named Victoria Vick (from her perspective, as if it is a memoir manuscript) and her client known as Y___ and the increasingly bizarre and intense things that happen between them. The central conceit is that Y____ is a genius scientist who has discovered a way to cloak himself to such an extent that he is invisible, though he is not transparent. He uses the technology to observe people, believing they can only be their true selves when no one is watching and he now feels a need to talk about his experiences and observations with someone.

The notion that people are only themselves when they are alone and when they have no awareness of anyone or anything watching them strikes me as a concept that indeed would fascinate Chuck Klosterman. Especially since we currently consume a lot of information and entertainment that is purported to be "reality" when instead it is almost always as mediated and altered as fiction. The set-up of a man with invisibility and the context of therapy, which is largely driven by conversation, both excellently fit Chuck's distinctive style in such a way that he can simultaneously forward a story and adopt the "thinking aloud / sharing ideas" tone of his nonfiction work.

While I admire this ambition and the way he managed to blend his usual voice into a different format and narrative structure, I found the book ultimately dissatisfying largely because the two characters are pretty unlikable. The more we learn about them, the less likable they become. It is more obvious in the case of Y___, but it's true of Vicky as well. This could be some meta-commentary on how we know all about the lives of people who are generally completely unworthy of any scrutiny, because of the obsession with and operations of reality shows, gossip magazines, and even most news channels. Nevertheless, it still falls short of the mark of being a great book.

Despite being problematic, there were plenty of great moments and anecdotes up there with anything else Chuck has written. I liked how Y____ spent time observing a woman who watched the TV show Lost with a friend, for instance. This was a show I was a fan of and had impassioned discussions about with other friends that watched. Probably one out of four times we were in the presence of a non-watcher who thought we sounded ridiculous. Which we did, just like the two in the book do as Y____ recounts. Additionally, Y___ can't go without arguing that he's nothing like increasingly obscure pop culture invisible men reference points H.G. Wells, Kevin Bacon, or Chevy Chase.

I realized there were a few ways to go about linking The Visible Man to music for this feature. First, since music is a big part of Chuck's interests, this book is packed with references. One character looks like "he was in a ska band when he was sixteen." Framed photos on a wall remind of the cover of a Duran Duran album. Y___ has a breakthrough epiphany when a girl plays Daniel Johnston's "The Beatles" on repeat. It would be too easy to include any of those here, though.

I also am less interested in the idea of a song that is simply about being invisible, though I can't resist sharing Radiohead's "How to Disappear Completely." It's appropriate beyond the literal consideration of Y___'s transience. The subtext is the notion of not taking ownership or responsibility for one's actions; even if you are resigned, thinking yourself invisible or "not there," it is denial to think you have no culpability for your actions or thoughts. Y____ embraces the freeing notion of invisibility, never really blaming himself. But as Vicky argues, it's kind of a cop out. On a few of his "studies," he interferes with people's lives to negative effect, especially since they are utterly stupefied by the seemingly mystical qualities of Y___'s presence. He's done real damage.

Radiohead – How To Disappear Completely

Of more interest to me is a song that would address the notion of being alone, since that is Y____'s guiding principle. By a complete fluke, at the time I was reading this book I also was listening to an EP by an act called Lightyear. I couldn't believe she had a track called "When You're Alone," with opening lyrics of "What do you do when you're alone? Do you put records on and dance around your room? Does your loneliness move with you?" The parallels to the book are entirely coincidental but shockingly tangible. Y___ in many ways is the "loneliness that moves with you," for one thing. A neat tie-in is that Y____'s "origin story" moment was when he observed a fellow high school classmate alone in his room. This boy had a tendency to put on Rush's 2112 record and rock out. Y___ realized he was seeing the boy in his most authentic form, even if no one at school knew the guy liked Rush because it wasn't something he would ever share with anyone.

When You're Alone by iamlightyear

Building from this, the fourth and final type of song pick is one that would be my equivalent of 2112. There are plenty of candidates for this, because over the years I have certainly had my share of solo rock outs alone in my room or car (and I'm not the only one…right?), but the one that jumped instantly to my mind was "Be" by Common. It's the first track on the album of the same name. It is one of my favorite hip hop songs because it just sounds awesome for one, but it also has a great message. It's all rising energy, starting with a gradual build of the instrumental tracks before Common comes in for what is essentially one long verse that culminates with the incredible final lines "Never looking back, or too far in front of me, the present is a gift and I just want to be." It never fails to get me pumped up. Now, I have no shame in liking this song and don't hide that I like it. But I might not be super forthcoming about the fact that I love to put this on and rap along to it when I need a boost. Definitely something I've done several times, all of them alone. Now you know. And you didn't need an invisibility cloak, either.

What do you all think of the book? What songs might you associate with invisibility, whether in the literal sense, a symbolic sense, or what you listen to when you are alone?