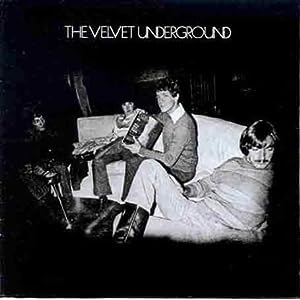 It's Week 3 of Velvet Underground Month. We move onto the band's third record, the eponymous The Velvet Underground. Released in 1969, it finds the band making another significant stylistic jump from their previous work.

Right away, the cover art tells us things are going to be different. First, there's no John Cale. He left the band and was replaced by Doug Yule. The discourse claims Cale was the heart of the band's avant-garde pursuits, but the single factor of his departure seems too simplistic as a complete explanation for the change of sound here. Besides, this album features "The Murder Mystery." More on that later, but just know it's a pretty experimental song. Anyways, what is also interesting about the image is that it is the first time the band graced one of their the album covers. Before, there was a banana and a black background, with a faint tattoo. The image of Lou Reed with a magazine or LP, sitting around casually with Yule, Sterling Morrison, and Maureen Tucker feels like a far cry from the band that played at Andy Warhol's Factory or rhapsodized about drugs and street life.

So how different is The Velvet Underground? It is more subdued to be sure, almost faint after the "in the red" sounds of White Light / White Heat. There are no overt drug references. But it would be a mistake to think the band lost their edge. Perhaps some could hear this album in a reverse Dylan at Newport sort of way, but to me, this cements their songwriting prowess. It's tighter, more elegant, more textured. And Lou really sings on this one too!

(sorry for the Spanish subtitles, but it's more about listening than watching)

As I kept pairing songs for The Velvet Underground & Nico, the framework that emerged here was a pyramid: 4-3-2-1. It's not hierarchical or a sign of quality, just a means of mentally organizing. The four-song level is the rock and rollers: "Some Kinda Love," "Beginning To See The Light," "I'm Set Free," and "What Goes On." These songs are characterized by a higher degree of sincerity and positivity in the lyrics than just about anything released before and a more pure, joyous channeling of rock music. "What Goes On" has some killer rhythm guitar and organ, with Lou's impassioned delivery feeding off the propulsion. "Some Kinda Love" is like Stephen Malkmus jamming with the Stones. And it's got cowbell! "Beginning to See The Light," reads as a manifesto for someone who is suddenly one with life and loving it. Lou's little adlibs are gleeful. "I'm Set Free" has more of a build to it, and throws in some ambiguity with the line "I'm set free to find a new illusion," keeping one from becoming too comfortable with the zest of the previous track.

Moving up the pyramid, the three song level is the downtempo, introspective, moody numbers. This includes the opening track, "Candy Says," which Doug Yule sings. I like the interplay with the bending guitar notes and the bassline. The lyrics are probing, a taking stock of a waning lifestyle and wondering what else might lie ahead – or if change is even possible. In many ways, this is echoes "Sunday Morning." There's also the possibly devout "Jesus." It is only a few lyrics, perhaps repeated to mimic a novena. This feels like a modern song, the gliding, nuanced instrumentation reminds me of a band like Grizzly Bear, for instance. The last of the three is perhaps the most famous cut on the album, "Pale Blue Eyes," an astonishing tale of beautiful sadness. The guitar is so expressive. It's about a flawed relationship, and listeners are powerless to keep from being sucked into its grip. I'm not sure Lou has ever comes across as so vulnerable and wounded. It is every bit as compelling as his manic, possessed performances on previous albums.

A totally new addition to the Velvet's oeuvre is represented by the two song level: the off-the cuff, simple meloidic ditties: "That's the Story of My Life," and "After Hours." Brief run times, basic instrumentation, a sort of lounge-y vibe, this is a side of the band not previously captured on record. The former is certainly enigmatic, despite it's scant lyrics. But it's the latter that's the more memorable. It marks Maureen Tucker's first turn taking lead vocals and demonstrates she is the prototype of Meg White. It's an innocent and insanely catchy tune, with a classic, old-timey melody of lament that the night can't last forever. This hearkens back to Lou's days in as a hired hand in the songwriting "factory," and seems tailor made for Prohibition-Era AM radio. A charming end to the album.

The "top" of the pyramid is the song that reminds us all the Velvet Underground could still be bold and experimental, with or without John Cale, or surrounded by mostly polished material or not. It may even be the most strange of all their tunes. It's called  "The Murder Mystery." It finds all four members contributing vocals, with Sterling and Lou creating a dense stew of words and phrases, and Maureen and Doug taking the chorus. The guitar in the verses moves from left to right channel and back, and the vocalists are split between the channels, but speak/sing concurrently. It's very difficult to parse, and in fact more enjoyable as a general sensory experience. I have no idea who gets murdered, if anyone even does. I can't help thinking about Pavement, from the guitar tone of the verse, to the "Newark Wilder" esque delivery of the "chorus," to the abstraction of the barrage of words. Imagine if you will Herr Procter…

After White Light / White Heat, largely characterized by its push to extremes of noise and experimentation, The Velvet Underground feels like a conscious move to take an opposite approach. This is their quietest, most straightforward rock album thus far, though not bereft of the band's edgy hallmarks. In moving through the catalog of the Velvet Underground chronologically, I found this album challenging to wrap my head around. It is more of a grower, one with subtle touches that take time to appreciate, as opposed to the immediate visecerality of the first two albums. Perhaps this would not be an issue if approached on its own. It is probably the easiest for a modern listener to appreciate; it would not feel out of place with most releases of the past decade. Thinking about its own time period, I can easily imagine a shock among fans at the change, but at the same time, with the band's late-developing reputation, this was probably many's introduction to the Velvet Underground.

Whatever the case, it's a great album like the other two.

You can buy it here or here.