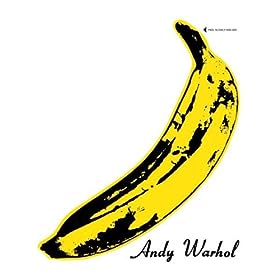 Why spend time writing about an album that's nearly 45 years old, that is properly acclaimed, and that has already been much discussed? I am not totally sure, to be honest. The best answer is it's something I want to do. For a variety of reasons (which I outlined briefly yesterday), I have become interested in acquainting myself with the Velvet Underground's catalog on a deeper level and I believe sharing that experience here on the blog will be interesting. I'm not coming at this like an expert or even a long-time fan. Just someone who digs music that has found quite an interesting listen and wants to talk about it. So here goes.

The main reason why The Velvet Underground & Nico is so highly acclaimed, why it has such a deep and lasting impact on music and broader culture, is that it was so unlike anything else in its time. Yes, that's trite, but it sounded different musically in its fusion of the avant-garde with pop, and its prominent lyrical themes of drugs, sex, and general grit of the urban experience were highly unconventional. It was, simply put, groundbreaking. The "thousands who bought the album and formed bands" (a reference to Brian Eno's oft-quoted anecdote) have continued and built upon these innovations, at least slightly dulling the impact of the original source. However, my initial takeaway upon listening to this album was that its shock, viscerality, and uniqueness remain.

What struck me next, after the first waves of dissonance and explicit thematic content wore off, was that one can really appreciate the craft of the music and the pure channeling of rock and roll, as well as the tight construction and poetry of the lyrics. These dualities are the true genius of the album. When I listen to the closer, "European Son," and it becomes straight feedback and noise for about six of its seven minutes, I am much less satisfied than when I listen to "Heroin," which is absolutely incredible musically, a balance of clean and spiky guitar, and lyrically in its imagery and sly eloquence. "And I guess I just don't know" doesn't read as profound, but in the context of a mind-altering substance being in your system and as delivered by Lou Reed, it makes perfect sense.

I've never done heroin, nor have any interest in ever doing it, but this has to be one of the best ever depictions of the experience. I even get a bit of a rush from the dynamics of the song. It starts with languid, clean guitar interplay and subtle drumming, then the tempo quickens like a racing heart beat, before calming back down. This repeats until things get truly frantic, "as the smack begins to flow" so to speak: the viola and guitars go wild, the drumming isn't steady so much as crazy, and it's no longer a good rush but a wreck. Lyrically, it's a similar pattern. And what makes it excellently written is how it doesn't overtly comment on drug use as good or bad. There is some allure, especially in tone at the beginning, and wanting to escape from a lot of crap like the big city, the politicians, and the dead bodies makes sense, but it becomes clear the narrator lacks control and can't truly get away. The cohesion of the music and lyrics to tackle a taboo subject in a meaningful way make it transcendent.

I kept thinking about parings as I listened to the album. My inclination was to match "Heroin" with "European Son," as the two epics that take different approaches and have different enjoyment value for me ("European Son" is my least favorite track on the album, "Heroin" is among my favorites). Besides "Heroin," there are two other heavily drug-related songs: "I'm Waiting For The Man" and "Run Run Run." "I'm Waiting For The Man," is about buying drugs and it is vividly detailed: the place, the people, the before-and-after. It echoes "Heroin" for its starting "I…" that just seems classic Lou Reed. The song is driven by a very rock & roll, pounding piano. I think its push-pull musical pattern that never truly resolves itself mimics the plight of a user: edgy to get the drugs, pacing back and forth, and then sated only briefly and soon needing more. "Run Run Run" is a series of four vignettes, each featuring someone who has died from using. The descriptors like "Teenage Mary" and "Beardless Harry" imply youth. Musically, it's based on a droning blues riff, punctuated by forays into explosive noise that give an extra bit of darkness. Is it weird that I, pretty much a non-drug user, think these songs about drugs are really good?

I don't like only the drug songs, though. Another pair of favorites couldn't be more different, "Sunday Morning" and "I'll Be Your Mirror." The Velvet Underground's ability to write beautiful pop songs seems to get lost in the shuffle when this album is under consideration, but based on these two tracks, it really shouldn't. "Sunday Morning" even features Lou Reed really singing, which is a rarity (his sing-speak approach is great though). The bells and Nico's harmonizing are delightful and the melody of "Watch out, the world's behind you," gets me every time. There is a strong contrast of the gorgeous sounds to the sadness of the lyrics. It's easy to think of Sunday morning as a happy, relaxing time, but here the narrator is trying to assure himself and channel this mood to avoid dealing with crushing disappointment and years of regret. On the other hand, "I'll Be Your Mirror" is a sentiment of pure devotion over a similar gentle musical backdrop. Nico's European inscrutability softens, and the lyrics capture a profoundly beautiful selflessness. Based on the rest of the album, it is easy to ascribe some tragedy to it; perhaps one could argue that she's trying to convince someone who won't listen to her or reciprocate. But my instinct is this is totally sincere, that it's just a lovely song devoid of any nefariousness.

Nico only lasted with the band for one album, but her contributions are significant, and I like the three songs she sings a lot. She first appears on the album to do lead vocals on "Femme Fatale," which like "I'll Be Your Mirror" features her singing the chorus while the band harmonizes in the background. I dig this, a sort of a Motown, doo-wop feeling that fits just as well on the album as viola squalls do. To me, the chorus of "Femme Fatale" is the album's most pure pop moment and it's just wonderful. Less seriously, I also get a kick out of Nico saying "clown" as "klon." The musical-lyrical interplay is fascinating here. A typical femme fatale image is something out of film noir, something seductive and sinister. You'd expect something more sultry and murky. Instead, the music is muted and sleepy. But the way that it almost feeds back, how it almost gets loud, is telling. Under the surface, is a cold-blooded heart breaker. Look out! I pair this woman in control with the subject of "There She Goes Again," who is in the opposite situation. A powerless woman, subjected to drugs and/or prostitution. The jangly guitar and harmonies of the chorus starkly contrast the "You better hit her" line, maybe the album's most shocking moment. Again, Lou was probably depicting a reality of urban life he encountered without judging it, but it is still unsettling.

Another exploration of dysfunctional relationships is the sinister "Venus in Furs." This references a book of the same name that basically birthed masochistic/sadistic sexual exploration (aka S&M). As you might expect, it's a pretty disturbing song. The lyrics are filled with imagery of dominance and abuse: leather and whips and servants. The music is carried by the viola here, plus the classic VU brittle guitar, the one that sounds sharp and cutting. The combination with the words creates an overall mood that is something quite macabre. My pairing for this song was "The Black Angel's Death Song," which I consider to be the most mysterious and moody song on the album. The lyrics seem to be the most poetic, in the sense of mimicking existing poetry, an amalgamation of the Middle Ages, the French surrealists, and the Beats. I don't know exactly what the song is about, but to me it evokes a medieval forest and carries an existential portent.

That's five pairings, which leaves one song. It, along with "Heroin," is my favorite. I'm talking about "All Tomorrow's Parties," a Nico-sung tune, and it fits her voice so well it's like the song came into existence for it. This is another exquisite mix of tunefulness and noise, of glamor and squalor. It conjures the mystique and pull of social status – so important in the art-intellectual-party circles of 1960s New York – simultaneously with its true emptiness. It's a song about endings and a future that never comes. It's like a modern day Cinderella who has no Fairy Godmother. It's haunting, it's captivating, it's heartbreaking, and it belongs at the heart of the album (setting up an incredible two track run with "Heroin"). I think I'm going to listen to it again right now…

The Velvet Underground is one of those evocative, iconic bands. You hear the name and you have associations without even thinking. Warhol, drugs, urban poetry, German models, more drugs. The band is both exactly what you think and completely different. 45 years later, I probably can never fully grasp the essence of the Velvet Underground, but there is no question in my mind that The Velvet Underground & Nico holds up as an essential listen and a vital creative masterwork.

You can buy the album here or here.