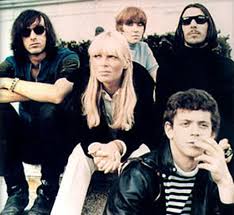 It's well established that The Velvet Underground & Nico is highly influential. Let's take a quick look at some interpretations by and influences upon subsequent artists.

First, some connections. I could be off on this, but does anyone think that the piano in "The Twist" by Frightened Rabbit is a lot like "I'm Waiting For The Man"? It's not exact and the songs end up in different places – not to mention having different lyrical content – but they struck me as similar. I love both, so maybe that's part of it. What do you think?

For me and my personal listening habits, I kept thinking about ties to the 90s indie bands I like, such as Pavement. They are clearly indebted to the Velvet Underground, whether consciously or subconsciously. Another band I'm into that's are self-professed big Velvet Underground fans is Yo La Tengo. I read that the bass in "Moby Octopad" is supposed to be a slowed down version of "European Son." It made sense in my head, but makes a little less sense when I actually listened to see how it compared. Check it out:

Pretty easy to trace the direct through line from VU to classic indie rock, isn't it? But after doing a little searching online, it's clear that this album was a widespread touchstone. A big favorite of ours here at TWD is Aloe Blacc, and he has a killer soul version of "Femme Fatale," a fresh take which still maintains the sentiment of the original.

[UPDATE] I found some more great stuff perusing Hype Machine but I can't share it here. However, Youtube came through with some clips for the songs. I am really into The Kills version of  "Venus in Furs," and Iron & Wine with Calexico doing "All Tomorrow's Parties," is just amazing. Each brings something exciting to the table.

And going even further, Beck and assorted friends took on the whole album as part of his Record Club series. Sadly, it's no longer available at his site, but is definitely worth streaming via Hype Machine. The group does some really interesting things with the classic tunes.

That should be enough…but if it isn't, I have one last thing. The great site Cover Me culled a cover version of each song into their own collection. It's a strong, diverse batch of covers, ranging from faithful to innovative. You can find it here.