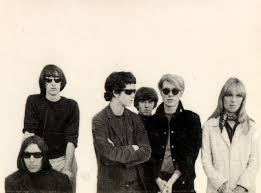 The Velvet Underground is probably the most "current" sounding of the band's work. I noted some different potential influences in the review, now check out some cover versions.

Apparently the members of Blind Melon were pretty into the Velvet Underground. I've heard a live version of "No Rain" where lead singer Shannon Hoon ad-libs "All I can say is that the Velvet Underground is great" in the song's first line. Now here's their country-ish take of first track "Candy Says."

One of my favorite bands is Built To Spill and I was thrilled to discover this awesome live version of "What Goes On." As a bonus, you should click here to check out lead singer Doug Martsch's incredible performance of "Pale Blue Eyes" [available for streaming only via Hype].

Built To Spill – What Goes On

Many artists have taken on "Pale Blue Eyes," it's just one of those iconic songs. I really dig this version by M. Ward. His haunted voice sounds perfect, and musically it's a bit more fleshed out while still being true to the orginal.

Given all of Lou Reed's exclamations and whoops, "Beginning to See the Light" would be a pretty fun song to cover and really cut loose. Kevin Barnes from Of Montreal is one of these singers that seems to just love to perform, making this a good match.

Of Montreal – Beginning to See the Light

We already knew Beck was into covering the Velvet Underground, so it shouldn't be a surprise to find him here once again, this time with Thom Yorke to play "I'm Set Free."

Finally, I want to share with you Rilo Kiley covering "After Hours." This track was simple and spare on the album, but it sounds good with a full band. Also, I can see how Jenny Lewis and the boys would be attracted to its infectious melody.

From what I can tell, there are tons more covers of songs from this album. Got any favorites I didn't include? Let me know!