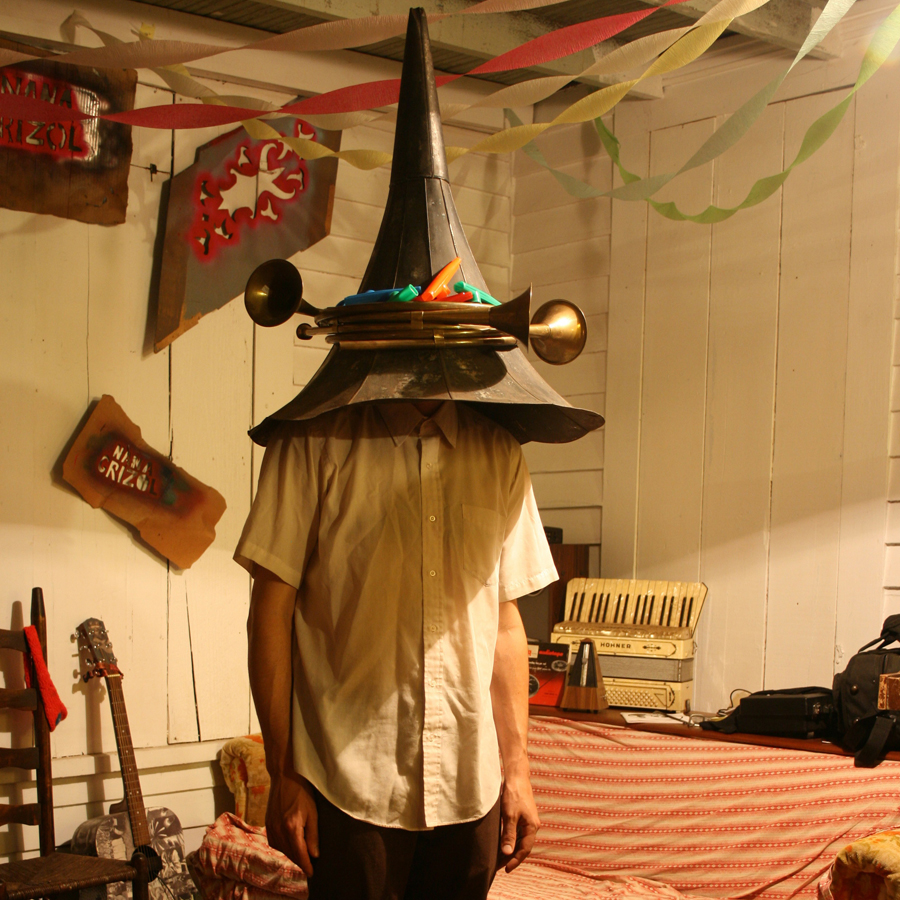 The thing about Pop music is (and I'm using the word Pop in the broadest and most generalized way possible) that it is all largely the same. The names and faces may change but the instrumentation, time/key signatures, song form, lyrical themes, and content delivery are all pretty much the same. Sometimes this bothers me – a lot. But the fact remains that when a Pop artist works well within this structure, it is a moving experience regardless of the surrounding mediocrity.

The Music Tapes are Pop musicians, but I believe that they are pushing the boundries of performance and compositional expectation. I had the pleasure of seeing them perform at the 2640 Space in Baltimore MD this week with Jeff Mangum and I was transfixed by their story telling, unusual song forms, instrumentation, interaction stage sculptures/quasi-band mates and general child-like imagination with adult means in achievment. I felt like I had slipped into a Michel Gondry film about singing saws, bowed orchestral banjos, and a seven foot tall metronome. I knew immediately that this was about to get awesome.

The bands latest project is entitled Purim's Shadows (The Dark Tours the World) and was issued on June 14, 2011. This band is a trip visually and aurally. Moreover, they are part of the distinguished Elephant 6 Collective and if you're even half a music fan than you've probably heard Julian Koster of The Music Tapes work on Neutral Milk Hotel's In An Aeroplane Over the Sea.

The Music Tapes: So The Day Long

The Music Tapes: A Lightning's Cheeks (Everything Gets Born Here)

Julian Koster had this to say about the new EP:

The Music Tapes, to me, is a sort of living dream that illustrates the continual process of how dreams become real. For example, when the 7-Foot-Tall Metronome sprang from my imagination, it was to be The Music Tapes’ primary rhythm instrument, and although it existed only as a drawing in a notebook, imagining it delighted and inspired me. My friends (Scott Spillane, Terry Rowlette, Robbie Cucchiaro, Laura Carter, Eric Harris, and others) saw the drawing and, in a flurry of excited activity, made it real. And thus the real world became different: it had a 7-foot-tall metronome in it.

Many of the basic tenants of The Music Tapes’ world are found on Purim’s Shadows, including the 7-Foot-Tall Metronome which provides the primary rhythm for “A Lightning’s Cheeks.” Also featured are the Orchestral Banjo and the Singing Saws. The Orchestral Banjo is played with a violin bow, producing a sound that I love very much; it’s like having at your command ghostly orchestras from crackly old records. And Saws, of course, sound to me like angels. This recording marks the first time a Singing Saw solo was encouraged (played) by someone other than me on a Music Tapes record: the solo at the end of “Night and Day” is the work of Ian Ludders, a great encourager of Saws, and I am honored to have had him play with us. Robbie Cucchiaro, The Music Tapes’ co-founding member, supplied horns and his signature euphonium. And finally, the most important contributors to this recording, and central to The Music Tapes’ sound, are the Webster Chicago wire recorder, RCA DX44 ribbon mic, and The Music Tapes’ array of antique and modern recording machinery and field recorders.

Without state-of-the-art machinery, The Music Tapes’ recordings would be next to impossible. But, of course, the past is where the future comes from. What often makes something new is not a loyal adherence to the trends and technologies of the moment but rather a loving interaction with the rich inheritance that makes our moment in time the most unique of all. All that has come before us has been left for us to find, dusty and often without any context to distract from its pure magic. It is my happiness to endeavor to make brand-new sorts of things in which all that I love most about the world will have a home, just as my friends meaningfully and lovingly set out to make a 7-foot-tall metronome exist, giving their love and friendship a large, loud wooden form that can march forward in time.

The Music Tape's EP Porim's Shadows is available for download here via Merge Records and Itunes here if that's more your bag. Additionally, The Music Tapes are about to embark on a sort of Salon Tour called the Lullaby Tour where they will play concerts in over 200 local houses! What a perfect idea for such an inventive and visually stirring ensemble. It looks like they'll be stopping off in Baltimore in January and I'll be damned if I'm going to miss it – neither should you. Dates and venues are subject to change so check here for more information as the tour closes in.