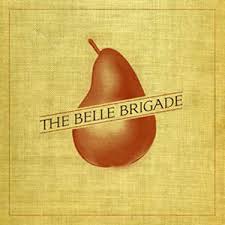 Here's a track from an upcoming release I'm looking forward to: "Losers" by the Belle Brigade, from their forthcoming self-titled debut album. The release date is April 19, a long wait considering how much I dig this song.

The Belle Brigade is a brother-sister duo of Barbara and Ethan Gruska. Barbara was the drummer for Jenny Lewis circa the Acid Tongue album and tour. I love that album and the show I saw on that tour was great. So, really had to twist my arm to listen to this…oh wait. No, I was very excited to check out the music, and what I've heard did not disappoint.

I've been holding off on posting for a little to get closer to the album's release date but I just couldn't wait any longer. We're having a bit of a slow week here and a lot has been overwhelming me. What better than a song that rises like a phoenix from the ashes of self-defeat to help rally the spirits? It probably goes back to Beck since being a loser has sounded so good. As can be expected from a brother and sister, there are strong harmonies throughout. I love how the song builds. The lyrics are a defiant embrace of shortcomings – we all have them, might as well accept them. Altogether, it's an empowering and diggity damn good listen. Check it!

If you are as captivated as I was, you'll want to check out the Belle Brigade's website. There you can here a few more tracks, watch some videos, and pre-order the forthcoming album (on CD or vinyl).