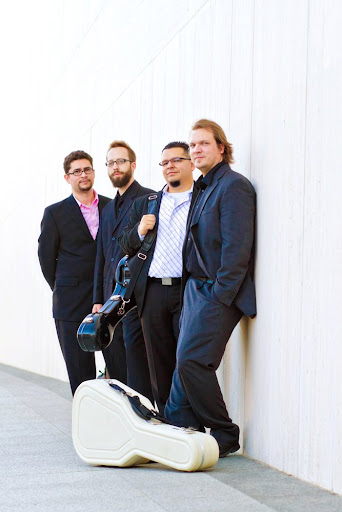 Forged in Austin as a graduate student group in 2005, the Texas Guitar Quartet has firmly established a reputation as the premier guitar ensemble in Texas. Members Isaac Bustos, Jonathan Dotson, Alejandro Montiel and Joseph Williams II have individually garnered acclaim and critical praise in international guitar competitions and as soloists on concert stages around the world. With their talents combined, they display a virtuosic command of the guitar quartet medium.

As a group, TxGQ claimed first prize with “Special Merit” in the 2006 edition of the Brownsville Guitar Ensemble Festival and Competition – one of the few competitions of its kind in the United States. An avid supporter of Texas-based composers, the group has premiered new works by Andrew Dickinson, Alfredo Barros, and Mark Anthony Cruz, who in 2010 wrote "Agitato and Departure" for the quartet.

The quartet maintains an active performing schedule throughout Texas and the US. Recent engagements include the Texas Music Festival (2009) in Houston, the re-opening of Bass Concert Hall in Austin, and the 2011 Victoria Bach Festival, in which they hold distinction of being the first guitar ensemble to perform for the festival. Other collaborations include work with acclaimed cellist Daniel Saenz and with the award-winning Turtle Creek Chorale in late 2010 at the Meyerson Symphony Hall. They will give their New York debut in June 2012.