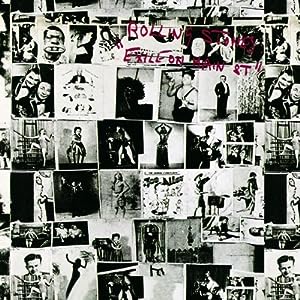 You've probably seen the posts on my favorite new music of 2010. As the year ends, I want to share with you my favorite album of 2010 not released in 2010. That would be the Rolling Stones Exile on Main Street.

There was a lot that drew my interest to this album. I had mainly only encountered singles of the Rolling Stones and I decided I wanted to change that. I love listening to long, dense, cohesive albums of the classic rock canon, and Exile on Main Street is certainly one of those. Finally a deluxe remastered edition of the album was released in May of this year, so it received all kinds of exposure.

The album certainly proved to be massive and sprawling. It is 18 tracks and more than an hour in duration. This is a very consciously crafted album meant to be taken as a whole and with relatively few immediate songs – at least by modern or even Stones standards. The music is all of a blues-based rock persuasion and of a unified sound, though there are enough shades of other genres and styles (like country and gospel) that give the listening experience diversity. It took me a few times through to start appreciating Exile on Main Street, but I eventually came to really dig this album. I understand why it is held in such high regard.

The highlights are numerous. I love the way Exile begins with the incredible one-two of "Rocks Off" and "Rip This Joint." "Rocks Off" is a particular favorite of mine, I love the horns. "Tumbling Dice" and "Shine a Light" are other great songs, and I enjoy the gospel-type choirs on them. "Loving Cup" is probably one of the most easy songs to like right away and for good reason. I also really dig Keith Richards' turn in the spotlight, "Happy." I could say something about every song but I'll stop there. The same goes for sharing a few songs; it was hard to pick so I went with the album's two singles.

Lyrically, Exile does not offer a lot for me to personally connect to. On its surface, the album is a portrait of the rock star lifestyle, of the Stones at perhaps their most indulgent and debauched. However, what makes it compelling is the songs that go beyond the glorification into revealing the tension, emptiness, and lack of fulfillment that ultimately follow. I do not relate much to the specifics but I do think it is an interesting exploration nonetheless.

This album represents the Rolling Stones doing what they do best, and for me, it is a great listen. I encourage you to check it out too. You can purchase the album here.

This concludes my 2010 recap posts. Thanks everyone for reading this year. Kyle, Dave, and I are all very excited about 2011 at Those Who Dig. Be sure to keep coming back, it is going to be a great year!