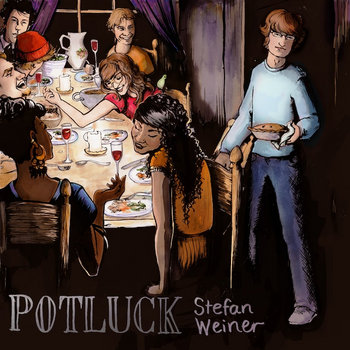 Our friend Stefan Weiner has a cool new project on the cusp of release called the Potluck EP.

The driving force behind this endeavor is collaboration. Just about all of the tracks were co-written by Stefan and a different musical partner. On the song I'm sharing here – the first single from the EP – he teams up with the musician Mree (another artist we've shared on this blog). It's called "Sardines." Generally sardines signify claustrophobia, of being packed in. That is part of the story, yet there is a much warmer, more human element to it as well. The main character finds himself crammed into a cupboard with a woman, but he's happy about it. It's intimate as opposed to stifling. As is usual for Stefan, the lyrics are original and vivid, so you can easily see the story unfolding as he and Mree sing it. All the details matter. I like how the music gets a little more intense as the two character get physically closer. For instance, as he wonders "Is her heart beating as fast as mine?" the bass notes seem to mimic a heartbeat. Mree's voice is lovely and helps add to the giddy joy of the encounter.

I find this EP's concept very exciting and love the idea of artists coming together to see what they might create. I know some of these people have worked with Stefan before, like his Town Hall bandmate Phoebe Ryan on "Say I'm Strong," (and she sings backing vocals on a few other tracks), but I'm sure others are entirely new. Stefan's voice and songwriting continue to be as strong as ever. Now with other musicians in the fold, additional shadings and elements expand his sonic palette, like new musical traditions that compliment the Americana style which remains at the core of his work. The textures from horns and strings add a new dimension to make his songs bigger and more immersive. He always sounded good in harmony with Phoebe, and it's thrilling to hear his vocal interplay with other singers like the aforementioned Mree or Anais Aida.

I've listened to the entire EP and though it hasn't been enough times to grasp all of its nuances (part of what made Town Hall's first album such a rewarding experience), I feel more than comfortable recommending you check it out. Especially since you can get it for free in exchange for signing up to be on Stefan's mailing list. You don't even have to wait until the official release date of August 12th – you can do it right now! Stefan hasn't announced any tour dates, but he expects to perform these songs live in the coming months. Oh, and another cool thing: Stefan's offering one-on-one songwriting sessions for up to 100 people. More details here.