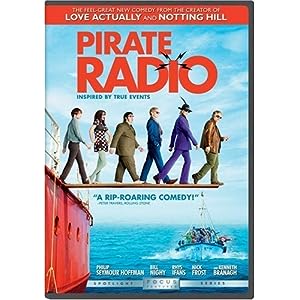 Scenes & Songs is a feature that looks at the intersection of music and film. It is intended to examine movies that involve significant musical subject content and/or distinct soundtracks, or maybe even just an excellent song for a specific scene.

I watched the movie Pirate Radio (2009, dir. Richard Curtis) the other night. I will say that up front as a film, it was alright, not great. It had a good cast (including Philip Seymour Hoffman, Bill Nighy, Nick Frost, Murray from Flight of the Conchords, Rhys Ifans, and Kenneth Branagh), some nice moments, and a very intriguing premise. However, mostly I felt it fell short of its potential. I am not a film critic though, and there certainly was substantial musical content to justify writing about it here.

Pirate Radio is a fictional story loosely based on real events. The plot centers upon a boat off the coast of England where a group of radio DJs broadcast rock and pop music to the deprived masses. This was the only way such music could be heard at the time – the film takes place in 1966 – as, by law, Britain devoted its radio waves to news and classical music. Thus, a rowdy bunch of a dozen or so radio personalities take to the seas, each with a deep-rooted love of great music. Their rebellious, rock and roll attitude contrasts with a Member of Parliament who will stop at nothing to shut the venture down. The other main storyline, which was less cartoonish but no less clichéd, is that a young man gets sent by his mother to live with his godfather, who happens to be the captain of the boat. Amongst a bunch of wild men clinging to a youth that has long since passed, Young Carl comes of age and learns about love, family, and of course rock and roll.

Britain in 1966 was clearly a fertile time for any rock DJ. Pirate Radio must have had a huge budget for royalties and licensing, because like a radio station, there was almost always music playing. Some of the action cleverly mirrors or references songs playing on the boat, and there are numerous montage sequences of both the radio crew and their listeners all over the UK getting down to the tunes. I always dig thoughtful soundtrack selections and seeing how people respond to music; both the quantity and quality of such scenes is why I felt compelled to discuss this movie. After all, the soundtrack is quite strong. There are cuts from the Kinks, the Rolling Stones, Leonard Cohen, the Turtles, Herb Alpert, Jimi Hendrix, the Beach Boys, the Who, Procol Harum, and many more.

It is a pleasant enough experience to watch Pirate Radio. The actors all do a good job, and lots of great music is at the forefront throughout the film. I just felt with such an interesting concept there could have been a much more compelling story than a simplistic rehash of a watchable but tired theme – spirited rock and rollers going against the stodgy establishment. It seems too reliant on simply creating basic setpieces and letting the soundtrack do the heavy lifting. For instance, as much as it was evident the DJs loved music immensely, I did not get a real sense of how they connected to it or why they had their distinct tastes. This would have been fascinating. Also, events that felt monumental to character development generally got glossed over almost immediately after they happened.

[For the rest of this post, I should probably say "Spoiler Alert."]

Again though, the high level of music is what is of interest, and the part that struck me most from a blogger's perspective happened towards the end of the movie. Without getting into how or why it happens or its resolution, there is a scene where the boat begins to sink. Everyone is scrambling and confused. But all seem to have the presence of mind to try and keep the records spinning and save what vinyl from their massive collections they can. I loved these images: a boat full of records, only a precious few of which can be rescued. On top of that, a possible impending death that brings the chance to go out with any song playing. I leave you with these hypothetical questions:

If you were on a radio boat full of all your favorite music and it began to sink and you could only save a few records (let's say not more than five), what would you grab?

If you didn't think you could make it off the sinking radio boat, what song or album would you want to play during your last moments?

Sorry if that is a little morbid, but maybe we can make a collaborative playlist from your responses – Songs for a Sinking Ship. Also, check out Pirate Radio and post your favorite moments here. Trailer below.