The Shrine of Dig represents music that has made indelible impressions on our lives, both musically and personally. We plan to enshrine works and artists that stand out for any number of special reasons, from those glorious moments we first heard something captivating and new, through the continuous impacts of the music upon our lives. The induction ceremony involves multiple posts where we will both explore and pay tribute to the words and sounds which have been so important to us. In doing so, we share with you some music we believe is damn near infallible and absolutely worth listening to. View all 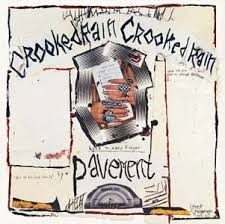 The Shrine of Dig represents music that has made indelible impressions on our lives, both musically and personally. We plan to enshrine works and artists that stand out for any number of special reasons, from those glorious moments we first heard something captivating and new, through the continuous impacts of the music upon our lives. The induction ceremony involves multiple posts where we will both explore and pay tribute to the words and sounds which have been so important to us. In doing so, we share with you some music we believe is damn near infallible and absolutely worth listening to.

Following Slanted and Enchanted cannot have been easy, but there is no doubt in my mind that Pavement maintained the same level of excellence on their second album Crooked Rain, Crooked Rain. It may be even better than their seminal debut.

Released in 1994, the story goes that this was the closest Pavement came to breaking into the mainstream. Even with "Cut Your Hair" becoming a modest radio hit, it was not to be. But personally, I believe the "indie politics" that are associated with this time period and this album are the least interesting aspect of Crooked Rain. Instead, I prefer to focus on this being a simply magnificent record, one that found Pavement making a great leap forward (sonically richer, more polished songwriting) while still retaining the core spirit (the lo-fi production and aesthetic, the cryptic wordplay, the detached cool) that made them unique. Most bands never come close to accomplishing such a feat.

To me, this is Pavement's most personal record and one primarily about growing up. This concept has always resonated in both the music and lyrics. When I listen, I hear nostalgia; I hear the struggle between youth and maturity. I think that's why this record speaks to so many people entering adulthood. We all can hear ourselves in these songs at some point. I will focus on the tracks where this is most poignant before touching on the album's other themes.

I dig a great opening track, and "Silence Kid" definitely fits the bill. It may not be as immediate as "Summer Babe," but the way it builds – from the little tune-up to to the steady riff to that majestic "Ahhhh" of Stephen Malkmus as the drums roll – insures you are fully immersed by the time the first verse starts in earnest. This is one of my favorites on an album packed with amazing tunes. I hear it as a call to strike out on one's own and find one's self, for the silent titular character to find his or her voice. It reflects those pivotal moments when one begins to realize that even your family does not always know what is best for you and that there is a world beyond your hometown calling.

Thrilling as this awareness is, there are many bumps on the road to self-actualization, as "Stop Breathin' " demonstrates. The song has a clever double meaning: it is about both a tennis match and the Civil War. But more than that, it embodies the mood of the points in life when we face problems that have no easy answers. Problems only we can solve, or attempt to. No one else can breathe for us, even when we are broken, so to speak. Musically, the song also serves as a good touchstone for the atmospheric exploration of many cuts on Brighten the Corners, Pavement's fourth album.

There is nothing easy about growing up, which makes it common to look back at more innocent times and lament their passing. In other words, we have all wanted to go back to those gold soundz. "Gold Soundz" somehow perfectly captures that elusive yet completely identifiable feeling of looking back a little too much. This might be my favorite Pavement song and certainly is one of my all-time favorite songs in general. I don't want to get too detailed as to why ('Cause I need secrets) but I do want to tell you how much I love the line, "You can never quarantine the past." The initial read is that you can never separate yourself from the past – everything we do makes us, like it or not. I think it goes deeper, though, to also mean that the past cannot be isolated, healed, and returned to us. Things happen, things change, and we just have to try and keep living as best we can. Take a moment and listen to this beautiful song.

Whenever I get to "Range Life," I find myself reliving all of the many aimless summer nights hanging out with friends that would swing between the boredom of doing the same things in the same places and the excitement of all the limitless possibilities that lay before us that night and beyond. (Many of these nights were spent with Dave and Kyle, among others). However, while this song is rooted in such instances, I absolutely believe it to be sung from a perspective years later when those nights are long gone. I hear "I want a range life / If I could settle down / then I would settle down," as the desire to have that open-endedness from when you were you too young to take advantage of it in an age when you cannot. It makes committing to anything difficult. Yet a line I love "You gotta pay your dues before you pay the rent," is one of the song's nods to the way we are supposed to grow. Anything worth doing takes time and effort.

"Range Life" also brings another shade of this album to the forefront. Besides growing up, Crooked Rain is also a California record. Yes, the sentiments of the album are universal, but there is no denying how embedded the Golden State is throughout. "Range Life' is hanging out in Anywhere, Suburban California. "Unfair" is a rollicking, punchy anthem that names muliple locations in the state and, in a clever echo of the Civil War references in "Stop Breathin'," proudly shouts out its Northern California pride. "Heaven is a Truck" also references the north, while "Elevate Me Later" has more of a Southern Cal feel to me, perhaps because the tokens and cinema stars make me think of the LA freeways and Hollywood. It may be a stretch, but "Newark Wilder" and "Hit the Plane Down" could be demonizing SoCal. The former song feels like a lurid, unsettling night in a seedy LA neighborhood, and the cannibalistic tones of the latter may be a commentary on the way Hollywood figuratively eats so many young dreamers alive.

The other motif that comes up repeatedly is music itself. Especially a more youth-oriented outlook on it, where kids are quick to identify with scenes and having credibility is of utmost importance. "Cut Your Hair" is a cheeky send-up to the way that alternative/indie bands were suddenly springing up everywhere in the mid-90s, and for every good one, there were hundreds that had no soul. I love the irony that the song ridiculing all the "special new bands" obsessed with getting big was the one by which Pavement almost ruled the airwaves. It is damn catchy. Similarly, "Fillmore Jive" evokes classic rock grandeur while mocking the trappings of such a lifestyle. It also conjures the hallways of a high school with kids falling into different musical subgroups of identity: the jam kids, the punks, the rockers, the dance faction. Finally, "5 – 4 = Unity" is a tribute to Dave Brubeck and his jazz classic "Take Five," a landmark work in the annals of all music.

I am not going to discuss the plethora of bonus tracks on the deluxe reissue (which is definitely worth buying) much, but I will say there many great songs worth checking out. I especially enjoy hearing the demos of songs that made the album. It's very fascinating to learn how some of these tunes evolved. The Peel Sessions are always a treat as well. Here's a favorite Crooked session track of mine.

Pavement – All My Friends

By now, you should realize that this album means a lot to me. Crooked Rain, Crooked Rain stands on its own as an exceptional work by a truly spectacular band, even before all the personal connections are considered. I love how it represents an already great band striving to get even better – and doing it. The thematic tone of growing up, the sense of place, and the meta music motif are each some of my favorite conceptual frameworks, and it continues to knock me out hearing them woven together so expertly and organically, even if my focus was on them individually for clarity's sake. It's a record I keep coming back to and still enjoy greatly. For these reasons, it unequivocally belongs in the Shrine of Dig.

I would love to hear what you all think about this album. Let me know what you like about it if it is a favorite of yours or your impressions as a first time listener. And be sure to keep coming back for more ceremonial induction posts of Pavement throughout the week!