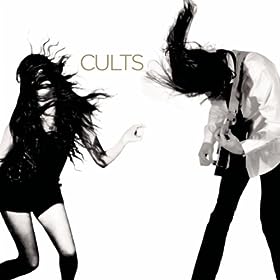 I was listening to Cults on the way home from work today and I had an interesting thought about my perception of the music as based on the cover art. Prior to picking up the Cults album last week, I had heard or seen very little from the band other than listening to "Go Outside" once awhile back and seeing that iconic white-on-black shot of the two band members dancing and whipping their ample hair around. Basically, my only personal thoughts of the band had to do with a picture of people dancing.

So driving along with the windows down blasting "Most Wanted" for the 4th or 5th time since I picked up the album, I started to wonder how my interest in the band would change had I never seen that album cover, or had they created a different album cover entirely. Cults' music, to me, bursts with a free-flowing, kinetic, danceable energy. But it's also heavily reverbed and has that modern "buzz band" quality that generally doesn't interest me.

The question is, if the album cover was a picture of a dog asleep on a train, would I be too bogged down in the qualities of the music that don't interest me, and therefore write off the band? In other words, is that damn album cover the reason I find the music so entertaining?

I don't really mean in a "should I listen to it or not" kind of way. It's more a question of whether seeing the album art affects your brain and the way it perceives the music you're listening to.

I don't really have a good answer for that, other than saying that this isn't the first time this phenomena has occurred. Basically every single Tom Waits album features an iconic cover that lends itself to the music within. But does Nighthawks At The Diner feel so greasy-spoon and booze-filled because Waits looks the part on the cover so well? Or would the tunes have relayed the same image to you regardless?

I guess these are all unanswerable questions since they're all "what-ifs" that we can't possibly test. But what do you guys think? Have you ever had an album cover truly affect the way you hear the music? What album did it happen with? Holler back!