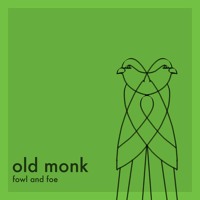 I liked the song "Seymour" by Old Monk a few months back, and now the band has a new single out, "Fowl and Foe." I'm digging it.

Have you ever ridden a roller coaster and got such a rush that you had to get back in line to ride again once it ended? That's how I feel listening to "Fowl and Foe," a quick blast I want to put on repeat. And with the energetic propulsion of the music, it practically demands multiple listens to understand the words Josh sings. As sound, the vocal performance stands on its own, particularly the acrobatics of what we can loosely call the chorus. When lyrics literally sound interesting as they're delivered it makes me want to know what they actually are.

Despite several back to back listening sessions, I still don't know everything being said, but I'm satisfied with what I've discerned so far. Apparently Josh wrote this song upon pondering consciousness, how weird and mysterious it is. Some phrases reflect that, especially as it relates to the strange ways we fall in and out of sync with others. This song seems to grapple with questions like: if everything derives from mental sensations, how do we really cultivate a sense of morality? Or: what are the signals we pick up from people and what do they really mean? It might be heady stuff, but the delivery doesn't put any barriers in the way of your enjoyment. Rather, an invitation to come back and spend more time listening.

My theory is that the song structure represents consciousness. That is to say, it's all over the place but has its own internal logic and overriding feelings take precedence. The song begins with what feels like a first verse and a chorus, but after, it shifts gears to become almost another song entirely similar to how our minds can veer off in new directions. The kicker is that it comes back around to something like the first part, only it does not have the same words, reminding of how we find patterns among many subtly distinctive bits. Perhaps this ties into the line "I'll follow convention if you're paying attention." The order we seek may not actually exist, but we often believe it does to make sense of things.

Just a thought anyway. Though I've mentioned enjoying the words a lot, Old Monk demonstrates skill for purely instrumental bits, too. They play well, and I like how they draw out the connecting part between what I've called the verse and the chorus just a little bit longer than you expect it to be, making it all the more pleasurable when that chorus does hit. They also lay down a moody, grooving bit in the middle section and re-enter the last section with some very expressive chords and nice minimal drum touches, enhancing the dynamics of the song. Great stuff.