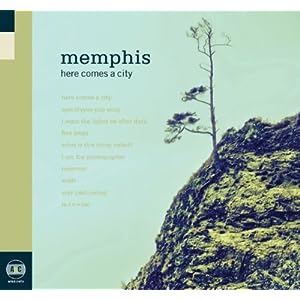 Memphis is essentially a duo composed of Torquil Campbell and Chris Dumont. This is the third full length by the band, but their first on Arts & Crafts. However, fans of the label may recognize Torquil Campbell as a member of the band Stars (who is no longer with the label, incidentally). The two met in the 90s in New York City, though no longer live in the same place. However, they have stayed in touch via music – a cool way to keep up a friendship, if I may say so. Because of the primacy of other projects (namely Stars) and the frequent geographic separation I guess one could classify this as more of a side project than a primary band, but I hope that doesn't dissuade anyone from checking out Memphis. Nothing about the album feels undercooked or half-hearted.

Memphis – I Want The Lights On After Dark by Arts & Crafts

Here Comes a City is a collection of polished indie pop songs, well-crafted but also engaging. The description I often found myself kicking around in my head was a "stately Death Cab for Cutie," but I'm not sure that's really accurate. This isn't a sprawling record or one that sounds all too different from track to track; rather, it feels cohesive and moves briskly, while still having lots of subtle textures that make it interesting. Things start off instrumentally with the title track, and between this and one of my favorite songs on the album, "Reservoir," I would not have been disappointed to find Memphis was a band with no lyrics. "Reservoir" is a majestic track that feels perfect for pensive, meandering night time drives (or walks or rides, for the multi-modal out there). It has some major Feel Good Lost vibes, which is quite alright with me. And "Here Comes a City" is like a pop mirage; it grabs your attention without overpowering it, but disappears before you can really get a handle on it.

Now, I do like the rest of the tracks on the album, the ones with words and singing (all done by Campbell); I just wanted to give the instrumentals props. Torquil has a clear, graceful voice, one often shaping a strong melody. The first "proper" track on the album is "Apocalypse Pop Song," which feels like a working title made good. It is a catchy song about the end of the world. What else would you name it? I especially like the line "There's the still the love you had for me that makes it so damn sad for me to know that it's the end of the world today" because it gets at why we need to make sure and live as much as possible in whatever amount of time we have.

The punch of this track and "I Want the Lights on After Dark," which I've posted above, give the album a strong opening, but I think my favorite section is towards the end. I've already mentioned liking "Reservoir." That leads into "Wait!" which pulls the neat trick of delivering a venomous message in a beautiful package. I can't say it's totally undetectable when the chorus is a repetition of "I don't love you anymore," but it is kind of jarring to compare the intent with the sound. I also like how the narrator's friends knew the woman was bad news immediately. Then there's "Way Past Caring," which slowly builds to an impassioned burst of energy unmatched elsewhere on the record. I really appreciate Memphis' sense of craft, but I do think this rawer moment (by the album's standards at least) shows a side that could be worth exploring in the future.

A few other things to note. First, the title was very intriguing to me and I tried thinking about what I heard through the frame of what "Here Comes a City" might mean. I can't say I really came up with anything worthwhile (and I have since read it may have been a reference to the recording process, which takes some wind from the sails of possible thematic analysis), but I am curious if any of you have thoughts on it. Second, this album did something I hadn't seen before, which was have a short story in the packaging instead of lyrics. The story references the album and most of its songs as it tells about a moment between a man and woman. I liked this a lot. What do you all think about this concept in general and the story as it relates to the album in particular? Know of any other examples?

As I consider the "A&C canon" for the year, Here Comes a City is more polished indie pop a degree or two removed from the ramshackle rock of Chikita Violenta that we heard previously. I think it's quite a good album and the stronger of the two for its cohesion and songwriting level. As we wrap this installment up, I encourage you to tell me what you think of the album, what you like or don't. Also, I'm curious for thoughts from anyone who has Memphis' earlier work or would want to compare it to Stars.

The album is available from Arts & Crafts here (and on Amazon and iTunes). Check out the video for "I Am the Photographer" below, as well as information on the next release and links to previous installments.

Next up: Ra Ra Riot "Too Dramatic" (Digital Single)