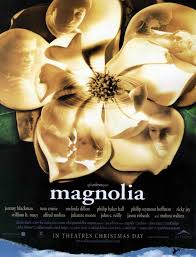 Today I continue my series on the superb uses of music by director Paul Thomas Anderson. For three weeks (in anticipation of his sixth feature The Master), I am highlighting some of my favorite moments in his films. This second installment is on Magnolia and the sweet styling of Aimee Mann, ladies and germs!

It may not be his best film, but Magnolia is currently my favorite of the PTA canon. The epic, interwoven narrative is a format that appeals to me greatly, and the examination of connections between people and connections of between one's present and one's past have became quite engrossing over repeat viewings. There are nine main characters (plus dozens more supporting): the host (Jimmy – Philip Baker Hall) and contestants, both current (Stanley – Jeremy Blackman) and former (Donnie – William H. Macy), on a "quiz kids" game show, a dying man that produced the show (Earl – Jason Robards), his aide (Phil – Philip Seymour Hoffman), his wife (Linda – Julianne Moore), and his estranged son (Frank – Tom Cruise), and a police officer (Jim – John C. Reilly) and a troubled young woman (Claudia – Melora Walters), who is the daughter of the host. We essentially learn how they are tied together and the implications of those ties. Like Boogie Nights, it needs to be watched to be fully appreciated.

Unlike Boogie Nights and its eclectic, sprawling soundtrack, Magnolia predominantly features the music of one artist: Aimee Mann (with a little Supertramp and "Also Sprach Zarathustra" thrown in for good measure). Paul met Aimee through Michael Penn, who helped with music for Boogie Nights, and her music was said to be inspirational to Paul's writing process. Lyrics even appear in the film as dialogue. Claudia on her date with Officer Jim says "Now that you've met me, would you object to never seeing me again?" taken from "Deathly."

Aimee's music serves the film well. The most indelible sequence uses her song "Wise Up." Though I am sure it doesn't work for some people, I find this scene endlessly fascinating. It is different than almost anything you would ever see in a drama, tonally jarring, and a huge risk. Particularly because a three minute passage where all the characters literally sing along to the same song falls apart under logical scrutiny: How could they all be listening to it simultaneously? How does dying Earl Partridge manage participate? It is like a music video interjected into the film. I love music videos, part of the reason why I ultimately like this scene a lot. In answer to the questions I just raised, I don't believe it is meant to be taken seriously; we aren't supposed to make sense of it. It is a sort of magical digression. In a film that grapples with the question of "are we alone or are we inevitably tied?" a scene like this emphasizes our bonds.

Besides digging any strong blending of music and film, it succeeds to me because the song has the quality to pull something like this off. It is so good, its poignancy overpowers any rationality. I can't imagine how many times I've listened to "Wise Up." The movie was my introduction to it, for which I am grateful. Those piano chords – relatively simple but straight to the soul – always get me. Aimee's voice is the other unique factor which elevates the song. It is both beautiful and sad. The pureness of it is lovely but there is clear ache behind it as well. This effortless mixture is the sonic equivalent of the characters in the film all trying to put on brave faces and keep composure while inner anguish threatens to bubble up and break them back down.

Because these are broken people. A major theme is how parents, mainly fathers, have wounded their children. Stanley only pleases his father when he's making money, and former genius Donnie had all of his money taken by similarly greedy parents and never recovered. Claudia was molested by her father Jimmy and is now a manic drug user. Frank of "Seduce and Destroy" fame is only an advocate for extreme macho control to hide the sting of his father Earl's abandonment when he was only a teenager and his mother was dying.

Thus, the damage a parent does to a child can stay with that child – and that parent; the inflictee is usually worse off, but the inflictor doesn't emerge unscathed – forever. Any relationship issues can do that, as is the case for Linda, guilty about cheating on Earl. Even the film's two most caring individuals, Phil and Jim, are obviously feeling inadequate and crave something deeper despite surface appearances. Either way, it is hard enough to move on when something so fundamental to your life shatters, but it is impossible to do so when you don't fully accept that irrevocable damage. None of these characters have. Whatever their motivation for suppression or their methods of coping, their level of success in doing so, the extent to which they appear "normal and fine," the hurt they haven't let go affects them all negatively and has persistently. Or, as several characters say, "We may be through with the past, but the past ain't through with us."

The chorus of "Wise Up – "It's not going to stop til you wise up" – perfectly counters that quote. These characters have all gotten stuck from the grief they carry. The song delivers the message they need to hear: growth comes from yourself and it starts with changing your mind. The pain and suffering won't cease until you recognize them and the difficult but necessary tasks for healing: to admit what occurred, to atone; to forgive, to ask forgiveness; to let someone into your life, to get someone out of it.

Everyone must absolve themselves for matters out of their hands and embrace the people who have come into in their lives. What else would a movie that shows the interrelated nature of this group be asserting if not the latter? And in regard to the former, I think that's the point of the frog storm. Seemingly unbelievable, out of nowhere stuff happens. It can be messy, unpredictable, and wreak havoc, but you have to deal and move forward. Also at play is the interesting dichotomy of what happens to you and what you can make happen. Most of the film explores "happened to," not the least of which is a freaky amphibious rain, but in its aftermath, we are left with the notion of "making happen."

Aimee Mann's music reinforces these narrative arcs. At the beginning, "one is the loneliest number," and everyone is most disconnected and entrapped by prior traumatic circumstances. At the end, a character like Claudia can truly be ready to say "Won't you save me?" She is open to love in her heart and knowing where to put it. To make the transition, she and the others had to "Wise Up." This climactic scene powerfully reveals the contents of the characters' hearts. They acknowledge their flaws and finally confront the distance between who they are and who they aspire to be, gaining a brief but tangible glimpse of a future unshackled by personal turmoil. What an incredible, universal emotional experience.

Next week, the series concludes with a shift from the soundtrack-driven early part of Paul Thomas Anderson's oeuvre to the distinct scores of Punch Drunk Love and There Will Be Blood.