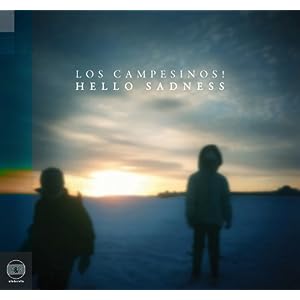 Aside from the multi-continental Chilly Gonzales, Los Campesinos! are the first purely European band released on Arts & Crafts in the year (which is now last year). A&C handles all of Los Campesinos! music for North America; this is the fifth album by the band for them, plus a few digital singles. Though there is not a physical connection, the band seems very much tied to Broken Social Scene in spirit, at least: they are a collective of (now seven) musicians in a lineup that has evolved over time, which creates sprawling, ebullient music and is full of direct, heart-on-sleeve emotion.

Los Campesinos! are a band that I've been meaning to get into for some time, but I just never got around to it until this album. I enjoyed some of their previous singles and I was able to catch a glimpse of them live once (a sudden onslaught of food poisoning forced me to leave the show), but that's the extent of it. I am happy that has finally changed. While I recall the band being a little more raggedly frenetic, this new album is great, an energetic and tightly crafted work.

Lead singer and primary lyricist Gareth strikes me as a fascinating individual. Perhaps some the tracks depict fictional characters or situations, but it seems much more likely that all of the stories are very personal. Sometimes this can run the risk of the "car accident" effect: it's not like you want to look, but you can't help it. Mostly, though, it is compelling and cathartic. On paper, it's hard to imagine someone going through so much heartbreak (and it's not all at the hands of a person; "Every Defeat a Divorce" is about the pain of following the English national soccer – or should I say football – team), yet it never feels inauthentic. For me, an abundance of personal details is acceptable as long as it strikes a chord, which happens often enough here. What really clinches it is the cleverness of the lyricism. There's plenty of wordplay and a lot of biting self-deprecation. I like how most songs often split the vocals from left channel to right to make them interact with themselves, mimicking an argument in one's head.

But don't overlook the rest of the band, either. It's not just the Gareth show. The instrumentation and arrangements on this album are awesome. The band may have smoothed out some rough edges, but what they might lack in unpredictability and adventure, they make up in majestic, sweeping scope. You may not even discern all of Gareth's lyrics by being so caught up in the rush of guitars, drums, and harmonies. For instance, "The Black Bird, The Dark Slope" is carried by the female Campesinos and some flashy guitar pyrotechnics that had me thinking about revisiting the delightful, complex-yet-melodic riffs of Stay What You Are. I think that the overall Los Campesinos! sounds sits at a sort of four corners. Instead of Arizona, Colorado, New Mexico, and Utah, you have indie rock, punk, emo, and pop.

The ten tracks move briskly over the forty-minute run-time, and I don't believe there is a weak one in the bunch. The opening triumvirate of "By Your Hand," "Songs About Your Girlfriend," and "Hello Sadness" packs quite the wallop. "By Your Hand" has a little keyboard intro that powers into the "love as death" lament of a bad relationship. The details are quite vivid. I think these songs work so well because these sort of moments in life take on a melodramatic, irrational feeling that is perfectly complemented by the anthemic quality of the music. I'm a huge fan of riffs that play off an open-note drone (like on "Cherub Rock," and "Where Have All the Rude Boys Gone?" to name just two), so "Songs About Your Girlfriend" has an opening seemingly made for me. And even with the bravado of the boasts, a hollow acknowledgement that a meaningful connection wasn't made surfaces, which is an amazing narrative feat to pull off. "Hello Sadness" chugs along beautifully, guitar and violin setting the tone for some fascinating imagery and evocation of what must be the most emblematic dichotomy of this band: hope and sadness, in full measure. This is a band that feels the highs and lows intensely and equally.

However, I might be even more impressed by the three songs that end the album. (Let me briefly say the four in between are no slouches, either). After a slow-build, "To Tundra" unleashes an insane hook of a chorus and feels like it is tailor-made for a stadium or huge festival crowd. "Baby I Got The Death Rattle" mopes along with a little bit of piano before unfurling a chorus that seems like it could have only come from this band: "And you, you are an angel, that's why you pray. And I am an ass and that's why I bray. If you were tomorrow, I'd be today." It might be a little love-it-or-hate-it, but I come down on the side of love it, for sure. Things accelerate to a pounding outro that keeps the verbal dexterity going with a juxtaposition of headstones to headboards. It's hard to pick a favorite moment, but the call and response and choral interplay over those angular guitar lines and spare but strong drumming on closer "Light Leaves, Dark Sees, Pt. II" makes a strong case.

This is a great album you should all consider purchasing. Arts & Crafts and the band have sweetened the deal by offering a DVD with the album as well. It includes footage of the band making Hello Sadness and teaching you to play "Songs About Your Girlfriend." It makes clear the band is hilarious and creative. You can purchase it from Gallery AC here (or on iTunes).

Check out the video for "Hello Sadness" below, as well as information on our final installment and links to all previous ones.