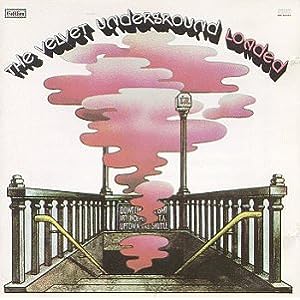 So it's come to this. The last review of Velvet Underground Month: Loaded, the band's final studio album (with original members at least). We've heard a lot of groundbreaking music from the band to this point. Now it's time to hear them cut loose on their most purely rock and roll record. The answer was to become a dancer, so hold your head up high, baby!

Each year from 1967 to 1970, the Velvet Underground released a new album, with each sounding different from the last. The earlier part of their career involved a good deal of sonic exploration as they attempted to channel the avant-garde into the rock tradition. The latter part found the music becoming increasingly polished and conventional, with Loaded so named because their new record label (Atlantic, a much bigger label than Verve, which released the previous three) requested an album "loaded with hits" that could enjoy radio airplay.

The band was successful in this endeavor. Just about all the songs sound like classic rock radio staples, and a few even became so: "Sweet Jane" and "Rock and Roll." But there are a few important points to make, the first being, even if the music is somewhat of a departure from their previous output, the lyrics are at least occassionally a sly demonstration of the Velvet Underground's edginess. Also, it is not as if there was no indication the band could make a rock and roll record. Lou Reed always seems like a man trying to satisfy two masters: the detached, erudite urbanite and the go-for-broke, soulful rocker. The cerebral and the spirited. Like the best poets, he knows the value of being both highly intellectual and emotional, and this duality often sparks many of the band's finest moments. Sometimes it derives from him finding an interesting way to bring them together, or, in the case of Loaded, it generally comes from the powerful impact hearing him rocking out has, since we have spent much more time with the sophisticate.

For instance, Lou channels his inner Mick Jagger to great effect on the insatiable "Head Held High." I can't think of an instance where he gives a performance this much energy. I find it absolutely killer when he sings "Ever since I was a baby on my mama's knee." The drumming and piano and guitar are all excellent, showing the Velvet's had some serious chops. The other song that really scratches my classic rock itch is closer, "Oh! Sweet Nuthin." It's an assured bluesy number, my favorite of all the songs Doug Yule sings – he does have the more conventional radio voice – and it finds either Lou or Sterling doing their most pure blues guitar soloing. These songs both evoke typical tropes of the genre, whether it is the catharsis of dancing or the plight of the down and out.

What the band does so well on this album is straddle the boundary between sincerity and mockery. The opening track "Who Loves the Sun" sounds to me like a send-up of moody early 1960s pop. The severity of the lyrics has to be a joke, "Who loves the sun? Who cares that it makes plants grow. Who cares what it does since you broke my heart." It feels like a send-up of the overly schmaltzy, especially since the musical style is so jarringly different for the band. Yet, the beauty of it is that anyone can just enjoy the rich harmonies, and many probably do relate to that feeling of utter heartbreak.

Like a lot of classic rock records, the band dips into different styles from track to track. There's the honky-tonk, rockabilly-ish "Lonesome Cowboy Bill," driven by some rollicking piano. There's the gorgeous "I Found A Reason," which has excellent harmony and lyrics of devotion akin to "I'll Be Your Mirror." It's a great Motown, slow dance-type song, you can almost imagine Marvin Berry and the Starlighters performing it at the Enchantment Under the Sea dance. "Cool It Down" is a slinky funk jam in which Lou shows off some crazy falsetto. This song may be about a prostitute and a meditation on instant gratification, evidence the band hadn't abandoned their fascination with the darker side of humanity. So is "New Age," which, despite reaching a rousing crescendo, is populated a strange tale of two castoffs: an awkward film obssessive and a fat, has-been actress. This feels like the most story-driven song since "The Gift." Perhaps the closest to an experimental sounding track is "Train Round the Bound," but it sounds out there more for being half-baked than ambitious.

I wanted to say the unsung hero of this album is Maureen Tucker, but it turns out she was on maternity leave and didn't really perform on it. So whoever is drumming (there were at least 3 different people) really brings a new dimension to the band's sound. The drums carry a lot of the songs and are much more pronounced than they ever were on any of the three previous albums. This is probably a function of aiming for radio play, as a strong rhythmic element is often part of hit songs.

Let's talk about the album's hit songs. I have to admit, "Rock and Roll" doesn't do as much for me as its legacy would suggest. Don't get me wrong, it's a good song, but I don't consider it to be one of the few best songs the Velvet Underground made. Nevertheless, it is a nice fusion of the jittery, guitar-driven tunes from The Velvet Underground ("What Goes On" and "Beginning to See the Light") with the classic pop-harmonized choruses from The Velvet Underground & Nico ("Femme Fatale" and "There She Goes Again"). Also, its got a great message. It's one of the many rock songs about rock songs (seriously, how many of these are there would you guess?) and why rock and roll is important to the youth in particular. It can be transformative, bringing signs of life to an otherwise boring existence. I am sure a lot of readers here have found companionship and recognition in music that they were not able to find in real life. Maybe the music even bridges to those real life connections. I also like the jab at modernity with the line how two TV sets and two Cadillacs "ain't gonna help us at all."

"Sweet Jane," on the other hand, is a song I love unabashedly. It's probably the Velvet Underground's best guitar riff and it's impossible not to get caught up in the rush of the belted-out chorus. Just a perfect pop song really, 3 tight minutes with excellent details, a life-affirming message, and utter catchiness. Maybe it's because I've spent so much time with the band and I'm reading into it too much, but I hear it as an encapsulation of their own journey to the point of making Loaded. The first verse, talking about the fashion style, rock and roll bands, and the poets studying rules of verse seems more representative of an artistic, exploratory age. In the second verse, Jack has a job as a banker and Jane as a clerk, typical of the path of maturity. However, the key is Lou's tone on "Ooh, and when they get home from work." It implies they are more than their jobs, that they still have their interests, and they have each other. Just like how the Velvet Underground has cleaned up but isn't 100% sanitized and soulless. Then, the third verse extends to the universal, first some facts about difference that to me have a subtext of tolerance for whatever it is each person does and likes. Then, the last chorus refutes "to live is just to die" as said by the evil mothers with the beautiful line "Anyone who ever had a heart, they wouldn't turn around and break it, and anyone who ever played a part, they wouldn't turn around and hate it." That's why the song lives on. That, and how it sounds damn good.

Well, that about does her. Wraps 'er all up. Of course, there will still be posts related to this album over the next week, and some other things to wind down the month. But that's the last album. I know I've enjoyed listening to them all and moving from one to the next. Loaded is a bit of a surprise as such a rock and roll record, though there's no doubt it stands with all the other three, and that in fact each album sounded surprising compared to its predecessor. The Velvet Underground always had this record in them, I'm glad they let it out. Whatever it was they did on each of their four releases, I think they were successful and made four great albums.

You can buy this album here or here.