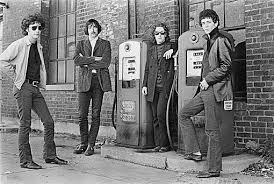 Here are a few clips of live performances from Loaded and one film that makes use of a cut in its soundtrack.

What is it with Jesse Eisenberg films ending in -land and Velvet Underground songs? Last week, I showed a clip from Adventureland that used "Pale Blue Eyes" as Jesse crushed on Kristen Stewart. Below, I have a clip from Zombieland that uses "Oh! Sweet Nuthin" as Jesse crushes on Emma Stone. Interesting connection, eh? Like before, there's a little bit of an intro to the scene before the song comes in and the choice works pretty well, I'd say. BTW, this song is also in one of the Digster's favorite films, High Fidelity, but I couldn't find any clips of that. So just go watch it to verify, plus "Who Loves the Sun?" is also used.

I tracked down a few live cuts from the Loaded era, but most don't have video. You can hear "Sweet Jane" as performed in its original, slowed down mode, and a lengthier "Rock and Roll." Phish wasn't the first to expand these songs, it turns out. This version of "Rock and Roll" is pretty cool, I must say. These both come from the Live 1969 album.

There's also some other neat live versions out there, including an interesting take on "Oh! Sweet Nuthin" that is much less rock and roll, as it mostly uses echo-y guitar effects without drums. Also, a jammed out version of "Train Round the Bend," which also uses that echo, drum-less approach. The words on these latter two are a little hard to hear, but I wanted to share them for their contrast to recorded versions of the songs.

Finally, here's a performance of "Sweet Jane" from 1993. This finds John Cale back in the lineup. The band doesn't sound too much different musically, though 20+ years will certainly have some effects. Lou doesn't replicate his vocal tics of the original exactly, though he does add new ones. The chorus is a bit more truncated too, but overall, I think the band still brings it. I also like how Lou references the Velvet Underground concert to get the crowd excited.