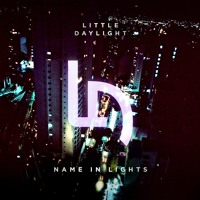 Starting with a series of very cool remixes, Little Daylight is now slowly unveiling their own original songs (which themselves are being remixed. Remixes and originals alike have awesome digital cover design, by the way). The first, "Overdose," was confident and brimming with energy, and I liked the ambiguity of its message about the allure of something so powerful but so uncontrollable.

New single "Name In Lights," is more subdued in comparison, and instead of starting with instruments before the voice comes in, we hear some gentle "ooh's" prior to anything else. I don't know a lot about this band, not enough to even know the name of the singer, but whatever her name is, I dig her voice. On this track, she is airy in the best way, like a leaf gliding down from a tree. The ascending melody of "You know you got your name in lights" is an indelible hook. The light groove of the percussion and synths are perfectly complementary to the vocal performance. I wouldn't say this is necessarily a part two from "Overdose," but something does seem to be ending between the narrator and the addressee. The song captures a leaflike floating sensation for sure, though it's one that is all too aware of the approaching ground. Still, I feel I could float on these sonic currents forever.

The band will be playing a show at Glasslands 5/31, opening for Charli XCX. A brief East Coast mini tour follows.