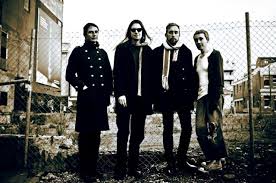 MLADYS 4 B1 – THE GOLDEN AWESOME – RUBY by M'lady's Records

TWD: Since this is the New Zealand showcase, I was curious – since I've never been to New Zealand – if I were to go, what you recommend I see or do that may not be very obvious?

Matt [Bassist]: See some bands, I suppose. Go for a swim.

Justin [Drummer]: Go on the ferry.

Matt: You could go on a farm stay.

Justin: Go and see the glaciers.

TWD: Those are a lot of good suggestions. Are you familiar with the films Spinal Tap and Almost Famous?

Both: Yes, of course.

TWD: Ok, so when I say a Stonehenge moment where everything's going wrong and then a golden god moment where you're at your peak, could you tell me one of those for your band?

Matt: I think our very first ever gig was a good Stonehenge one. We didn't really have any songs, we just got up on stage and made a hell of a racket and cleared the entire bar. They all loved it, they were just standing outside to listen 'cause it was the right volume there.

Justin: There was another one at a bar in Wellington where we were in the middle our set and there was some kind of electrical burning smell. Eventually they had to evacuate the whole building, we had blown some holes in one of the PA speakers. So that was fun. But they let us finish, so that was good.

Matt: But the last band didn't get to play.

TWD: The album that's coming out, is that the debut album for the band?

MLADYS 4 A2 – THE GOLDEN AWESOME – ASTRONOMY by M'lady's Records

TWD: You have the song "Astronomy" and for some reason that made me think about "being out of this world," but while still in it. Do you find it's harder connect in our world with all the distractions we have, like with cell phones and technology? Have you noticed a change at all in people not being present as much?

Justin: Yeah, but people adjust to it, like anything.

TWD: The notion of the high life, when I think about trying to accomplish everything I might want to, I had a realization that part of that connects to just knowing stuff has to end. Do you find that to be a liberating feeling or more of a fearful feeling? Or it just depends on the situation?

Justin: It does depend on the situation.

Matt: I think with the songs, we don't have anything to say, particularly. It's more impressionist than actually singing a song about astronomy or high life.

Justin: It just comes out of the lyrics somewhere, so that's what the songs are going to be called. A lot of that's vocalization rather than actual words as lyrics.

TWD: Right. That's kind of how I hear music actually. For the most part, it takes me awhile to hear words. And I'm not trying to say that's what you're going for, I'm just saying here's what it made me think of to come up with questions.

Matt: To the things ending, I think the sense of nostalgia is something that we do in our music. Maybe?

[Around this time, we got cut off as the band had to soundcheck. But I was able to catch up with Justin and Matt later to finish things up]

TWD: What is that?

TWD: And a question? Any interesting question at all. Or random. Or esoteric.

Matt: Where do you get crack in New York? (laughs)

TWD: Alright. The other thing I've been asking bands is, we're making a little playlist for an alien spaceship that comes. It's going to preserve some songs from humanity while journeying around the universe. What would you want the aliens to have from our music?

Matt: Isn't there already one of those?

Justin: There is, but it's outdated.

Matt: That's true. There are some good ones on that one probably.

Justin: It's a big decison. Anything spring to mind?

Matt: "You Are My Sunshine."

For more on The Golden Awesome, check out their Facebook page.