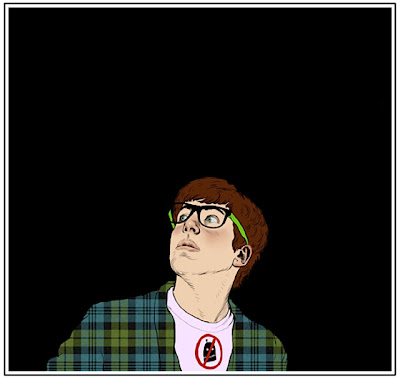 An up-and-coming kid who's definitely on our radar is Hoodie Allen. He's young, fun, and works his ass off, so what's not to respect? He's also a favorite of our blog brethren over at Sunset in the Rearview, and Lydia never steers us wrong. Hoodie's just released a video for his jam "You Are Not A Robot".

It's nice to have some light-hearted talent inject itself into my normally topical, gloomy rap world every once in awhile. Hoodie Allen is that in spades. This video for "You Are Not A Robot" feels like something I would have produced with my cheap camera and a few of my friends in high school, but it works with the tone. It's not high-brow or intensive, it's just some cute kids in robot suits running after some well-dressed dude that stops every once in a while to rap. Hoodie's approach to the rap game is a breath of fresh air, honestly.

In case you're not reading Sunset (in which case, get your asses over to Sunset!), they're throwing a Hoodie Allen (with openers Anthem and Eddie B & Tim Gunter) show next Thursday in Durham, NC so if you're anywhere near the area, get yourself there.