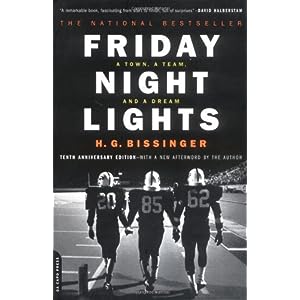 This Book Is A Song is a feature in which we match songs to books we've recently read.

I first encountered Friday Night Lights as a film. Among the many reasons I enjoyed it was the stellar soundtrack, which I acquired. I next became a huge fan of the TV show. After five incredible seasons (well, four if we are allowed to ignore the misstep-ridden Season 2) there is no doubt it is one of my all time favorite drama series. I decided to finally cover my one remaining blind spot by reading the book that started the whole phenomenon.

It is easy for me to forget because of my own fanaticism that most people aren't necessarily familiar with all the great works under the FNL umbrella, so here's a little background. The book, originally published in 1990, is author H.G. "Buzz" Bissinger's non-fiction account of his yearlong immersion in the city of Odessa, Texas to cover the Permian Panther football team's 1988 season. It was widely hailed as a landmark work in sports writing because of the attention it gave to not only the players and games, but also the broader context of the community. In 2004, it was adapted into a film that was essentially a compression of the book, using the same real names, locations, and circumstances. Its innovation came in part from director Peter Berg's (cousin of Bissinger) kinetic, hand-held style and the atypical but incredibly effective choice to have instrumental post-rock (and Texas-based) band Explosions in the Sky provide the soundtrack. Two years later, it began a five season run as a television show on NBC (with some crucial assists from DirecTV) that combined the wonderful aesthetics of the film and the powerful community scope of the book to tell familiar but ultimately different stories of fictional characters in fictional, present-day Dillon, Texas.

It is my opinion that the TV show is the best work of Friday Night Lights canon, but this post is about the book, itself not exactly a lightweight. I'm going to briefly discuss some outcomes and plot points, so if spoilers bother you, be forewarned. Like I mentioned earlier, what makes this such a compelling read and an inspiration for further adaptations is the fact that it's about football but not just football. Besides literal physical descriptions of the distinct landscape, Berg fills in the large canvas with a portrait of Odessa that includes the senior star players of team, head coach Gary Gaines and his staff, a wide array of community members, decades of the town's history, and even the concurrent larger-scale state and national issues. For example, the bitter rivalry with Midland-Lee has a lot to do with the divergent development two cities experienced during the wild, surging highs of excessive oil riches. The state semi-final playoff game between Permian and Dallas' Carter Cowboys is unbelievably racially charged because of a statewide educational judicial battle and the deep-seated prejudice that festered for years. With this backdrop, every game is electric and that much more meaningful; it makes the oft-used and cliched gladiatorial metaphors seem hollow and impotent.

The book resonates now because the oil bust of the 1980s that just about crippled West Texas and prompted economic struggles in Odessa mirrors what the current recession has wrought throughout the United States in the past few years. The economy will get better (here's hoping, anyways), but the book will permanently resonate because its themes of handling adversity and negotiating self-identity are timeless. Think about how often sports metaphors are used when you experience a setback or need to get something important done. It can be trite and stupid, sure, yet the actual display of a team working hard to perform and rising to the occasion, or alternatively, failing to meet their goals but putting it behind them to persevere and try to "get 'em next time" can often be inspiring.

Bissinger certainly had a talent for conveying all the grit and determination of the Panthers. Building off this, I found his ability to make us understand how the stakes of every practice, of every game, had been raised to epic levels even more laudable. It was truly masterful how he pierced into the psyches and emotions of the high school boys who had the unenviable task of carrying the weight of a whole town on their shoulders, not to mention their own futures. It is no stretch to say that football defined the players completely. Surrendering to the larger collective, to the Mojo spirit as it's called, was critical for the team to become a beautifully performing unit, but also wreaked harrowing damage when that identity ceased. For some, it was premature, like the knee injury that alters the course of Boobie Miles life by bringing his career as a star running back to an early end. Bissinger makes the poignant interval between limitless potential and fading glory that the high school players face so tangible it hurts. Odessa, and everyone in it, is on the very same cusp, which is why the Panthers are so emblematic. The subsequent film and television series have continued to masterfully explore all these topics and I highly recommend you check any of them out.

So what music do I use here? It's difficult to ignore Explosions in the Sky – a great soundtrack indeed – and the TV show had a lot of choice cuts throughout its run (my favorite probably being Tony Lucca's "Devil Town" cover at the culmination of Season 1), but there's nothing creative about that. I may still throw them in here, though I've chosen a different track for my selection: personal history. I never played football, but I did play basketball and I loved it. I was obsessed with the NBA. I pored over stats books and magazine photos, bought trading cards and merchandise, and had probably an unhealthy amount of teal and purple in my wardrobe because my favorite team was the Charlotte Hornets. Since I was relatively tall for my age during middle school, I even entertained the notion that I would continue to shoot up in height to such a degree that a future as an NBA star was my natural destiny.

Turns out gravity always wins and my growth spurt leveled off just shy of 6 feet. Not to mention my grade school basketball teams were lousy. It was a far cry from the winning tradition at Permian, but we still wanted to win (mostly because it was so elusive) and like most athletes, engaged in any ritual we could in the hopes of gaining an edge. Chants, high fives, lucky t-shirts, that sort of thing. As I said, the Charlotte Hornets were my team, so my first favorite basketball player was Larry Johnson. After his trade to New York, Glen Rice took his place atop the throne. It was a magical day when I found out that he made it a point to sing R. Kelly's "I Believe I Can Fly" before every game. Remember, this was before the peeing. And before Sarah Palin (or at least, knowledge of said incident). The song does have something strongly motivational about it, though it's faded a bit from the majesty it used to have for me. I did love how, no pun intended, it seemed to soar as it crescendoed to the gospel choir.

You better believe that from that point on, my Space Jam Soundtrack cassette tape was firmly ensconced in the deck of whatever vehicle I was carpooling in for rides to games and practices. I didn't just play R. Kelly, I also was a big fan of Seal's "Fly Like an Eagle." This one to me doesn't hold up all that well now – of course, it probably didn't then, but I didn't know. The problem is that it's a bit too smooth, but it's reasonably faithful and could still be worse. If the red leather interior and the mini limo-esque exterior appearance of my dad's Chrysler New Yorker (Google it. You won't be disappointed) didn't make me feel gangsta enough, the the Monstar anthem "Hit 'Em High" surely did, which featured a line-up of B. Real from Cypress Hill, Coolio, Method Man, LL Cool J, and Busta Rhymes. It is shocking that none of these rappers cursed once – maybe they signed some sort of a "Will Smith agreement." A lot of the basketball metaphors sound clunky and the political references (Bob Dole, anyone?) have not aged gracefully, but it still oozes that maniacal energy that drew me in originally. I don't know if I should be happy or ashamed of the fact that I still remember a lot of these lyrics, but I do know that the video still owns, son.

I know what you're thinking: No Quad City DJ's? Nope. Sorry, that's not how I roll. It was those three songs, and those alone, that comprised my pregame soundtrack. If the fact that I can count my team's win total on one hand – for all the seasons combined – is any indication, it didn't really work. But it felt awesome. Maybe that's why I experienced a little heartache for Don Billingsley, Mike Winchell, Jerrod McDougal and the rest of the seniors when they lost the semifinal game as the clock expired, one short of their ultimate goal of State, the end of their dream. Ok, maybe singing the Space Jam Soundtrack to my heart's content in my dad's self-described "pimp-mobile," isn't quite the same thing, or even close, but there's no denying in that moment, I felt I was about to light the court on fire, completely oblivious to the knowledge that we'd lose almost every game.

Sport can be cruel, but I have a lot of good memories too. I think the same is true for Odessa. Everyone there has experienced both pleasure and pain from football and they all know this duality is what shapes our lives.

Alright, let's close out with a quick double shot of FNL movie and TV soundtrack songs. And say it with me: Clear eyes, full hearts – Can't lose!

Explosions in the Sky – Your Hand In Mine