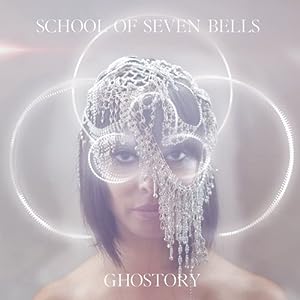 As if today wasn't already packed with exciting things like Cinco De Mayo festivities and the Kentucky Derby, tonight promises at least one spectacular show in the city: the great dual bill of NYC-based, atmospheric, coed duos at Le Poisson Rouge: EXITMUSIC and School of Seven Bells.

Le Poisson Rouge is a very cool venue (TWD was last there for the New Zealand showcase at CMJ) at 158 Bleecker Street in Manhattan. The doors open at 6:30, it costs $18, it's 18+ and you can buy tickets here.

I've seen EXITMUSIC before and they were incredible. It was a show earlier this year at Death by Audio, and I didn't know anything about the band beforehand. I have to admit, it's not often a completley unknown band makes a huge impression on me live, but they definitely did. Their sound is very dynamic, ranging from soft and contemplative to huge and enveloping. In a few weeks on May 22nd, they will release their debut full length album Passage on Secretly Canadian records (pre-order here) and I'm very excited to hear it. The advance word is glowing and a few songs have appeared online and via NPR. Here's the title track.

The pairing with School of Seven Bells is a good match, for SVIIB is also duo that features super compelling voice – courtesy of Alejandra Deheza, and what a voice it is – and a rich sense of atmospherics. The group has been touring in support of their recently released album Ghostory, which is quite good (available here, and check out "The Night" via a January 2012 Weekly Roundup). Their latest release is a really cool cover of "Kiss Them For Me" by Siouxsie and the Banshees, which you can check out below.

Hope to see you at the show!