When I decided to that I was going to be a serious (classical) musician, I regarded this word with esteem and respect. I saw the aspiration for virtuosity as a means of achieving self-actualization, and decided to dedicate my life towards this realization. However, like so many things, after six years of conservatory training the shine wore off this word and I fear that I have lost my reverence for the beautiful. After all, art is the habit of the artist. Nevertheless, it is my intent to use this platform to (re)discover, admire, and share music/musicians of the highest caliber, in any and all genres, strictly for the purpose of listening to Music worth listening to.

John Adams (b. 1947) is a contemporary American composer whose work I really dig. It's been no secret that I like modern classical music with an emphasis on minimalism or anything that places weight on repetition and a sense of temporal stasis. As such, Adams is a self proclaimed Minimalist who got bored with minimalism. What this means is that he composes with the minimalist sense of style, but breaks some of the rules simply because he wants to in order to achieve the sounds he has in mind.

This piece, John's Book of Alleged Dances, was composed in 1994 for string quartet and pre-recorded prepared piano. The Kronos Quartet commissioned the work and are the performers heard here. When performing this work the musicians trigger the pre-recorded piano parts with electronic foot pedals on the stage. In addition, there are 10 of these 'alleged' dances and they can be performed in any order determined by the musicians. When asked why these pieces are alleged dances the composer remarked, "[because] the steps for them had yet to be invented." The dances are also given nonsense names which I suppose are meant to add to their quirky and evocative musical nature. The names are as follows:

These works may only be alleged dances, but that won't stop me from gettin' down. If you want to hear the entirety of the work it is for sale here. 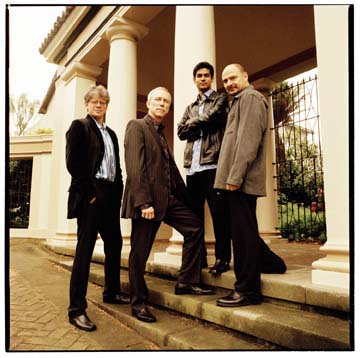