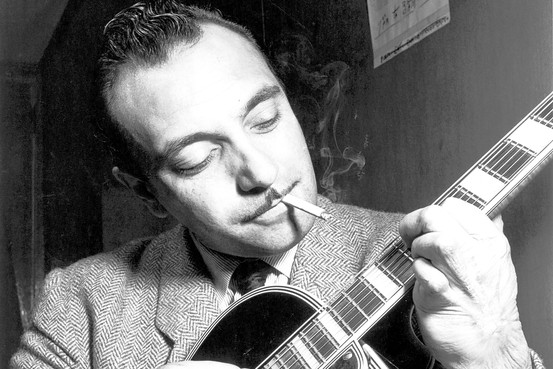 Django Reinhardt (1910-1953) is one of my favorite musicians. His style is always palatable and his technique, musicianship, and virtuosity were completely enviable. He was a musical revolutionary in every sense of the word and his collaborations with violinist Stephane Grappelli lead to a career of exalted and venerable recordings.

Even after loosing the use of two of his fingers on his left hand after a fire, Django relearned the instrument and played with remarkable fluency. There really hasn't been anyone quite like him since.

The band featured on this recording of Georgia On My Mind is Stephane Grappelli on violin, Django Reinhardt on guitar, Louis Vola on bass, Freddy Taylor on vocals, and Joseph Reinhardt and Pierre Ferret also accompanying on guitar.

Django Reinhardt: Georgia On My Mind