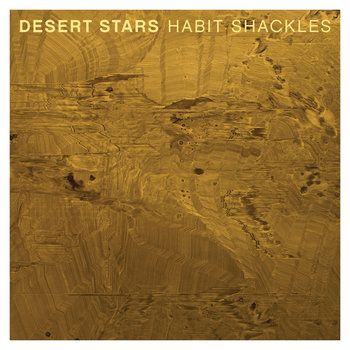 Brooklyn band Desert Shackles release their new album Habit Shackles today and play a show for the occasion tonight at Cameo Gallery. Both are definitely worth checking out.

I like the sense of mystery best about this album. Most of course reveal themselves with repeated listens, and though I have only had a couple of weeks with this record, I suspect it would always remain partially inscrutable. The vocals are never easy to understand, whether from stretching words out or feeling muffled and distant in the mix. The guitars build in layers that are more likely to obscure as they increase in volume, when usually loudness gains clarity to boost its power.

But don't get me wrong, this is a good thing and an interesting artistic choice. To me, the central dynamic that makes Habit Shackles such a compelling listen is how it seems to both push and pull away. A song like "Farewell Decade" (or "With the Bears" and "Off the Cliff" which we've shared here and here, respectively) has a head-nodding groove and a practically bar rock sing-along chorus. Yet it's still hazy, almost reluctantly rousing itself like a late sleeper. The lyrics include the line "I just want to be far away from it." I can't tell a lot of the words beyond that, but I like that I get a feeling without knowing exactly what singer Janelle Best says.

Her voice along with the harmonies from Jane Herships and Carrie Ashley Hill often come across like a slowed down girl group. "Tents" is a good example of their interplay. It's a little bit soporific, but pleasantly so. Also sneakily; being further away, we must try harder to understand. Yet upon doing so, we find the words do not always welcome us. Take "How Hard You Try," which repeats "You could never have me, no matter how hard you try," several times over. Because we've spent so much time trying to understand, we want to reach her character all the more, even as the gnarly guitar pricks up its defenses to scare us off. The tension that makes the album so memorable.

The previous track to this, "Past in the Trash," is more instrumental, with light drum brushing, claps, a harmonica, delayed guitar, and vocals like "Ooh-ooh" that feel abstract and textural. It fosters contemplation, making us wonder whether this person has come down a rough road, likening their past to garbage, or if they simply have no use for whatever it was they went through and want to get beyond it and never look back. And I can't tell if "Normal Man," is something the singer wants or if, as it turns to a drone, it's meant to take down the idea of finding uncomplicated happiness in another, bolstered by how she almost seems to mutate the phrase into "No more men."

Habit Shackles has plenty of interesting moments like this and a nice range of musical diversity that makes Desert Stars sound hard to pin down. I get bits and pieces of many sources, suggesting the band has an omnivorous musical diet, feasting on a range of genres and styles to issue art that feels like it's their own. Sometimes I hear the Walkmen, such as in the guitar distortion on album opener "One Good Ear." "Dear Jamie" is a druggy, piano-driven blues ballad. The ambience of electronica, the melody of vintage pop, the tone of shoegaze, these are all other essential ingredients. Sometimes the band rocks and sometimes they ride out a cosmic dirge.

I'm still getting to know Habit Shackles, but I like it. It challenges you to spend time engaging with it, even if sometimes the vocals evoke a sense of alienation. The music is often cloaked in fuzz but its variety and nuance provide many entry points. I get a strong sense Desert Stars will bring a whole new dimension to these songs in a live setting and I am very excited to find out how tonight at the album release show, which takes place at Cameo Gallery. The band goes on at 9:00, and the bill includes See Through, Shining Mirrors, and a DJ set by Caveman. Hope to see you there, but if you can't make it, you can get Habit Shackles on bandcamp.