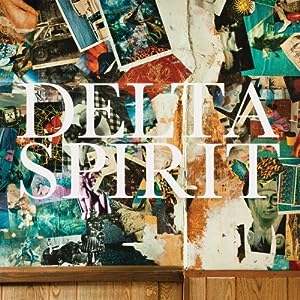 In an effort to cover more new releases in a more timely manner, I came up with a new feature. I'm calling it First Impressions. The idea is to choose one album a week and write a stream-of-consciousness review during my first (and only, for review purposes) listen. The pick will come from your, our reader's, votes. Think of it like live-blogging meets Faulkner meets Greil Marcus meets American Idol…only it's probably nothing like those things at all.

I'm trying to get this feature happening the week the new album reviewed comes out and should have it that way soon, but I'm going back to March 13th for tonight's post. Based on your votes, I've got the self-titled release from Delta Spirit in the First Impression crosshairs. I will remind you once again that what follows is an unaltered transcription of my in-the-moment thoughts on my first and only listen to the album.

The Delta Spirit's latest is their 3rd album. They may be familiar for having one of their members, Matthew Vasquez, in the band Middle Brother, which also includes members of Dawes and Deer Tick. I have never listened to their other albums aside from digging the song "Trash Can" and enjoying their Take Away Show on La Blogotheque. Here's what I wrote while listening to Delta Spirit on Spotify, which you can do by clicking here.

Fades in with guitar. A little kick drum and the vocals, feels like an anthem in the making. "How could one little speck make a difference to the rest?" Good question. Bursts just after 1:00, but quickly reverts back to a similar verse. I do like the drum beat throughout. Some interesting metaphors through the idea of gutting a house. With the guitar chords and some yells, I'm feeling like the explosion nears, but again, not quite.

The drummer is likely to be the secret weapon on this album. Is destruction going to be a theme? This guitar bit reminds me of Vampire Weekend a little, it's so high and bright. Especially with the rhythm behind it. I'm not sure about this "September" part, where it gets heavy. It almost sounds like another song crammed in, not in a good way. Yes, this lighter section sounds better to me. What's he saying, "You spin a lie?" Can't quite tell. Yeah, the bass/guitar part around 2:00 is jarring. A bit uneven overall, though the cleaner part sounded decent.

And we've reached 4 billion songs with "California" in or as the title. Shouldn't that be banned at this point? Let's see if Delta Spirit found a unique angle. "I want you to move to California for yourself." I admit, it is such a mythic land. I've only been once, but it has a certain aura and mystique to it. "I want you to go find somebody else" – killer line. Does he mean it? Or better, does he both mean and NOT mean it? This "hoo-ooh" passage feels appropriately melancholy yet positive. "Though my heart will fight it, you're not for me." Wallow in misery much? Kidding aside, I do like this track. Very fascinating concept to explore, a good mesh with the music too.

Traveling northeast, what will we hear? There's probably not enough songs about Idaho, though the best one is probably already written – Built To Spill's "Twin Falls." This has a bit more of an edge to it maybe. Thunder and getting wasted, yeah, could be edgier. "Like they do it out in Idaho" – I'd like to see a tumblr of this. The second verse is lighter, more relaxed, but the jagged guitar comes back for the chorus. This delay pedal-chords break is kind of cool sounding.

Slowing back down, this is a nice instrumental passage. Does have a home feeling to it as the vocals come in. By that I mean, familiar but a little distant. The vocals are good in this laid back manner. Yeah, this instrumental part with the guitar and little bass is working for me. No drums at all, three minutes in. "Sometimes sitting still is better than to try" – that is definitely a dangerous feeling, and one I've felt at home, which is often comfortable in a way that makes you inert and complacent. I dig this one.

The second song title that makes me think of the Red Hot Chili Peppers. The drums waste no time getting back in the swing of things. "A sweet sound I don't want to leave" doesn't quite fit tihs snakey, psych-tinged backdrop. It is slightly exotic, which makes it intriguing. Like when a food that tastes odd and you probably don't like it, but the taste is so distinct you keep eating. I guess this song really isn't so bad or distinctive though. I'm not really sure what the band is going for on this album. The song I knew of theirs was so upbeat and energetic. This is feeling like a band a trying to make a more "mature" record. Maybe that's good, but maybe it's not. Although, wondering about "being honest with myself" is interesting.

This could be more of what I was hoping for. The shouts are energetic, the beat/rhythm has some swing to it. A little dual-tracked guitar between verses. The singer seems a bit more confident too, yet according to the words, he may be at war with his mind. "I don't like you brain, and you don't like me, but let's work together so I can get back to killing you with beer." This impassioned bit right before 2:00 sounds strong, I think the band needs to be rocking a little harder, or really embracing straightforward beauty like on "Home." Brevity helps.

So with that title, a slower, and a bit worldly I might add, intro will this song explode? It's kinda 80s, which seems prevalent throughout, but I feel like this is enjoyable. "If it feels like this, it's probably wrong. I don't know what comes now" and later, "Happiness, it comes at the strangest times, it's true. I don't know what comes now" are good words. Trying to decide what serves the band better, the upbeat or the slower. Both have been fairly successful. It strikes me I'm listening to a band that still is finding themselves. This has a tone like "Beth / Rest." So, "Time Bomb" is not super emphatic, but it does build in energy. Could be a good live song.

I'm feeling this album is hard to review because it is so mediocre and normal to me. Not much that's exciting, or much that's bad. This opening first minute, for instance, is pleasant. But what to really say about it? "I'll be dead in a few years time" reveals a little creak to the voice, it sounds better to me when it's pushing out. Like at the end of this chorus. I tihnk Delta Spirit needs to be more ragged and reckless, though I may be basing that on "Trash Can." Ok maybe now I'm enojoying this at the "Oh no" bit. It's like they are responding to me! Haha. Some of these lyrics do get at a sense of urgency not really embodied in the sound.

The drumming once again shows flashes of real promise, yet as I think back on the scope of the whole album, it might have been underutilized. Ok, a nice buzz of distortion coming in. Were they saving their best songs for last? Yes, with that snarling chorus, I feel a little vindicated about the band needing to be louder and faster. I don't think they need to NOT try out other things, but it's clear they have a strength that can be further honed. And they can do slow and pretty well as "Home" shows. This feels stronger than the early cuts.

Could be a low key one. This organ/synth with a little drum pulse is nice. Piano and voice coming in and I'm feeling good about this. His voice almost sounds like Jim James here. I can get behind this as a closer. I think you should always go out with a good song. Occasionally the slight / weird closer can work, but generally bringing out a big gun makes me want to listen to the album again and makes it more memorable. "There are certain things in life you cannot change" is kind of obvious or blah to read/write, but it sounds good sung. Never quite bursts, recedes gradually.

Like Andrew Bird, this one felt difficult to do an instant review, but unlike Andrew Bird, it was more because there didn't seem to be a lot of noteworthy substance to discuss. I wouldn't say this is bad, though I do not feel like it's one I'm going to spin much in the future. I'm giving it 2.5 out of 5 stars. I should say that I had to listen to it in parts because of Internet connection issues, so maybe approaching it a little disjointedly accounts for a half star. Remember, the review reflects the one-time listening experience. My favorite tracks were probably "Home" and "Money Saves." You can purchase the album on Amazon or iTunes.

You still have the chance to vote for the 3/20 release to get reviewed: Lost in the Trees, Margot and the Nuclear So & So's, or The Shins. (Vote by sending a tweet to @ThseWhoDig or commenting on our Facebook page). Leave a comment about your thoughts on Delta Spirit below if you'd like.