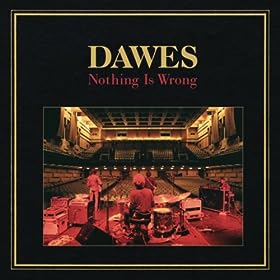 Dawes – Coming Back To A Man

There’s a weird phenomena that occasionally happens when I sit down to write about a band that I really, truly love. I end up having nothing useful or interesting to say. It’s like all that will spew out of my brain is a string of “dude, shit’s so awesome” or “man, this song’s just, like, great” inane one-liners. This is happening to me with Dawes and their new album Nothing Is Wrong as we speak.

Here’s the thing: what Dawes does so incredibly well is so subtle, understated and rooted in convention that it becomes hard to pick apart. I mean, why is Neil Young so awesome? Because he’s Canadian and wrote southern rock songs? No, it’s just because he’s a great songwriter and a badass.

It’s the same sort of concept with Taylor and the gang. Goldsmith’s songwriting is poignant, thematic and beautiful, but it doesn’t try to smack you upside the head with it’s emotional potency or it’s brilliance. The band doesn’t shred your face off or woo you into a psychedelic realm, they just cooly and smoothly work impeccably in a genre.

Nothing Is Wrong wears it’s influences on it’s sleeve more than North Hills did. Maybe that’s not right. It just works on several more direct influences than North Hills did. Along with the usual Crazy Horse touches, Goldsmith is channeling Jackson Browne something fierce on songs like “Fire Away” and “A Little Bit of Everything”. My first spin of Nothing is Wrong on wax made me get up and make sure I hadn’t put on Running On Empty by accident.

If it’s not clear by now, I love this album. I love this band. And listen, there’s a ton of music that I like, and some music that I really like, but it takes a certain emotional connection for me to love a band. Dawes, you have my heart.