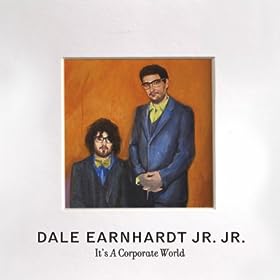 Dale Earnhardt Jr. Jr. – Nothing But Our Love

Dale Earnhardt Jr. Jr. strike me as composers, but not in a grand, conceptual kind of way. It’s just that their music is perfectly made up of so many brilliant little moments that the whole ends up being intricately constructed. Their debut album, It’s A Corporate World, envelopes you in sound while allowing their emotional honesty to float to the surface.

Now, they don’t strike me as the sort of guys who pour over every detail of every second of every sound in the studio – that’s not what the music’s about. It’s more about filling out the space between that perfect chord strike/harmony at the beginning of the chorus during “Morning Thought” or fitting slapping percussion around the heartstring-tugging opening lyrics of “Nothing But Our Love”. Those moments break you down, everything else is made to build your weeping self back up.

I was a bit surprised when I first saw the track list for It’s A Corporate World and it included all three songs from their Horse Power EP. It seemed like a bit of a cop out. After countless listens through the LP, however, I wouldn’t have it any other way. Dale Earnhardt Jr. Jr.’s music is your big, comfortable bed at home. It’s your mother’s home cookin’. It’s familiarity incarnate, and the inclusion of songs that had already taken hold of me gave me that warm, fuzzy feeling of understanding.

The duo of Josh Epstein and Daniel Zott's biggest strength going forward is that they have an organic, electronic-tinged indie sound that hipsters love to love. That’s a great thing for both hipsters and the rest of us music-loving freaks because it means their music will spread and be heard. I just hope the moments that break us down don’t end up outnumbering the ones that build us up, or we’ll become a society of crying suckers, kneeling at Dale Earnhardt Jr. Jr.’s feet.