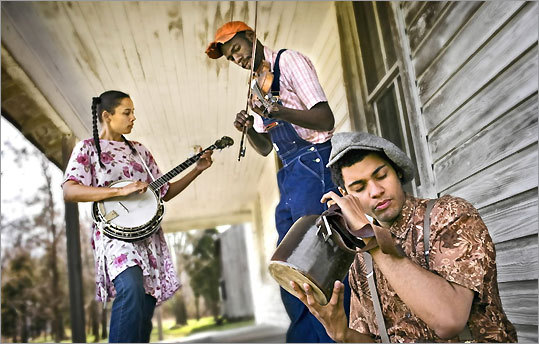 Three musician friends, Dom Flemons, Rhiannon Giddens, and Justin Robinson, traveled once a week to Mebane, NC to learn from and jam with an 80 year old, old-time fiddler named Joe Thompson. Thompson was one of the last of his kind – a fiddler who learned his music from back porch sessions with field workers after a day in the hot Carolina sun. He taught the three the songs and style that had been passed down for generations. They soon began to play Joe's music publicly, occasionally with their humble teacher. And thus was born the Carolina Chocolate Drops.

I hesitate to call what CCD does "new-grass". It's so fully rooted in traditional bluegrass, roots, and jugband (oh, and the occasional hip hop flair) music that a new, hip label isn't even needed. The three members are young and talented and as Robinson says: "We play in an older tradition, but we are new musicians". It's hard to pin down CCD do that makes such an old tradition sound so fresh, but it's probably the raw talent and pure energy they bring to every song. Instruments and vocal duties are often shared between all members.

Along with the Punch Brothers, Nonesuch has some serious bluegrass music going on. Buy a few Carolina Chocolate Drops albums, including their 2010 release Genuine Negro Jig. You can also catch them on tour for what I can only imagine is a killer show.