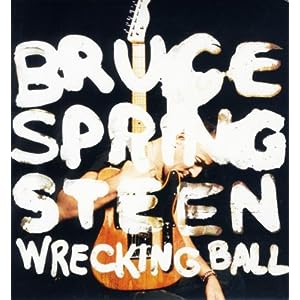 In an effort to cover more new releases in a more timely manner, I came up with a new feature. I'm calling it First Impressions. The idea is to choose one album a week and write a stream-of-consciousness review during my first (and only, for review purposes) listen. The pick will come from your, our reader's, votes. Think of it like live-blogging meets Faulkner meets Greil Marcus meets American Idol…only it's really nothing like those things at all.

For the very first First Impressions, I asked Dig-Nation to choose among the latest albums from Andrew Bird, Bowerbirds, and Bruce Springsteen, all of which came out this past Tuesday, March 6th. When the polls closed, there was a tie between Andrew Bird and Bruce Springsteen. I flipped a coin and it came up in favor of the Boss, but I'll probably do one for Andrew Bird too, because why not?

What follows is my in-the-moment thoughts as I listened through Bruce Springsteen's new album Wrecking Ball for the first time. I'm not going back to hear it again or polishing my mad scribblings. This is just straight out the brain, yo! I'm presenting it to you as is. It was tougher than I thought it would be to do, to listen and write and think and keep up. I'm a big believer that many albums need time to grow, but I think there is also value in our initial reaction and instinct. This exercise is purely the latter, so judge what follows how you will based on your own values for processing music.

So, the Boss. Wrecking Ball is his seventeenth studio album. Here's what I thought, song-by-song, while I checked it out via Spotify. Click that link if you'd like to listen as you read this.

Drums to start it off and a siren guitar line. I like this nice groove with the band all coming in. "The map that leads me home," and then "Chicago to New Orleans," feels like a travelogue. Shotgun shack to the Superdome, obviously thinking about New Orleans now. The strings are almost a contrast to the message of the words, more precious than the sentiment. The drums keep shuffling. "Where's the promise from sea to shining sea." Reminds of the deeper meaning behind "Born in the USA." Got some "Hey-hey's!" over the last minute. Oh, a fade out, those are not very common anymore.

Whoa, some big drum sounds, and a sort of a street gospel hoedown vibe. Not quite sure what to make of this. The guitar solo around the 1 minute mark isn't bad. Verse 2 starts with Bruce packing some heat! More "hey hey's," this time with a choir. We all want easy money, it has an easy feel to it as well. Like, we want it, maybe we'll get it, if not, oh well. This gets a little repetitive and it's not even three minutes through yet.

Little guitar scratch to get it started. Bruce counts it in. His voice sounds really good on this one, that soulful croon of the everyman. Shackled and drawn, those words are just perfect for him to sing. The string break is making me think of track 2 already. "Sweat on my shirt," and other lines, this is a miner, quarry song. It's almost like a mythic time where any job, even if it's backbreaking and awful, looks better because of the shortage we have now. This is almost like a musical. Even more hoedown-y. Gospel outro.

First down tempo track so far. Piano, a little scattered electric percussion bits. This is like "Portrait of a Handyman" through the first few lyrics. When he says "I'm a jack of all trades. Honey, we'll be alright," it's like the couple who was born to run has grown up, settled down, and owes a lot on their mortgage in a shitty economy. Mention of a hurricane is probably more general than Katrina, especially with the blue sky. A horn break. "It's all happened before and it'll happen again," sort of optimistic but sounds more resigned. This song feels too long at six minutes. I dig "Use what you've got, learn to make do," but…huh? "Shoot the bastards?" Seems abrupt. Not really feeling this solo outro.

5 – Death to My Hometown

Interesting title. Another beat start. What the hell is going on – it's like bagpipes and weird chanting. When the Boss comes in, it's like an old folk shanty. "Powder flask" When he talks abou this hometown, is it New Jersey? Feels more like old Jersey. By now, I'm feeling like these songs are following a formula, a sort of chanted verse of a timeless melody that leads into an instrumental break which has some instrument tracing that melody out. And repeat. Why are the enemies returning, didn't they already destroy the town? The "Sing it hard, sing it well, they're greedy thieves, whose crimes have gone unpunished" could be a metaphor to today. I hope the music video for this isn't like old-timey villagers shooting cannons at stock brokers. Actually, that might be kind of cool.

This drum beat is so cavernous sounding. "This is my confession, I need your heart, in this depression." Oof. Awful rhyme. The line about never being hopeless though, that's so true. You never truly feel down with Bruce, which is a gift. He paints these tough tales, but doesn't feel too depressing. The vocals do seem weary here. The sun is breaking again, haven't we heard that lyric before? Man, this chorus does not get any better hearing it over and over.

Ah, so it's not a Creeper Lagoon cover. Ok, here's Jersey reference. "I've seen champions come and go…if you've got guts…and balls…step to the line, bring on your wrecking ball…take your best shot." Fuck yes, he's thrown the gauntlet down! This is working for me. You got nothing on us is the overall vibe. The guitar strums sound epic. Live this will rock. Is that sax? This uptempo bit might be a little too jangly. Nothing tomorrow and "Hold tight to your anger, don't fall to your fear," I'm into it. Getting into the impermanence of things, Bruce is getting his Ozymandias on. "Glories into parking lots," ouch. The worst kind of urban development. The "hard times come, hard times go" build is great, the only truth. The best we can hope for is a united voice, defiant against the opposition. I love the "1-2, 1-2-3-4!" This is where everyone loses it live, I bet this song goes another five minutes in concert instead of one.

Acoustic intro, brings things down after that rush of the last track. "Ain't no school ever taught it" – that's some good learnin'. Piano comes in on verse 2, a little percussion. You just know it when you feel it, that's pure instinct and feeling, something I've always liked about Bruce's songs. This is bluesy, there's a little swagger, but it also has that "old-timer, I've seen it all" perspective. Again, some huge drums. The guitar solo here fits a bit better than on other songs maybe. I got to say, the simplicity of the earlier parts felt stronger than it does by the three minute mark when it's bigger. It was more direct. Another fade out on this one. Seems like a classic rock thing.

Sort of an odd mash-up at first? Is that a Spotify ad on? No? Anyways, we're getting biblical on this one, with the shepherd rising up, the angels. Also, the gospel choir. It's nice though, understated. Drums less cavernous. The money changers and lenders, floods. The old stand-ins for today's greed and destruction. Soundtrack worthy, possibly, like his other low key movie cuts. I see Topher Grace getting fired, starting to volunteer somewhere. A homeless shelter run by Morgan Freeman, his new mentor. God, what is this Bruce Almighty plus Pursuit of Happyness? Terrible image, considering I like this song a lot. Oh, a rap? Who is this? "Where you once had faith, there's only doubt." I've felt that lately. "Soldier!" that's what he's saying, I finally get it. I like it, it's less polished.

Who's this getting it started? More communal. Not sure about this drum machine. Oh, this guitar sweep will work. Some major organ. No one uses those much anymore. This one feels like it's going to be epic. Still can't tell what those instruments are on the melodies, is it strings? Or keys? The tone is odd. "Won't be back," a journey song. Whoa, I'm almost getting some "Paradise City" vibes as it breaks to instrumental for some reason. This dream is an equal opportunity dream. That is some big time sax!!! Did Clarence record this before he passed? Feels like it has to be him. I'm not usually into saxophone solos in rock songs, but this one works so well. Soulful. Things are getting biblical again. It's a "support your companion, don't count on structure, institutions, organizations" kind of song. How many sunny days coming up have we heard about? That's got to be the 4th! Get another metaphor. Oh yes, more sax. "People get ready," ok, a little Curtis Mayfield – might even be a traditional song? – to take us out, I'm into it.

How are we going out on this album? Very slow ambient intro, taking its time. Here comes the acoustic. Will this be subdued or explode? I'm going with slow. Nice to listen to just Bruce as we end it. Oh…I'm probably wrong, by the 1:30 mark. Here's some whistling and banjo. We're back to 1877, then 1963, then last year. Others die, we're alive. I feel like this should either be stripped down, which I'd prefer, or really big. This feels a little too… is that Johnny Cash?? Anyways, I guess it's like a campfire jam. There's handclaps. Xylophone. It just doesn't seem to match the subject matter. There's that "Ring of Fire" bit again. Well, maybe not full on, it's a tease. Over and over. And then a little whistle, guitar, and we're out!

I don't know if any of that makes sense, but that's what I was thinking. I'd give this album three stars out of five. It's pleasant but not a necessary album to have most likely. My favorite tracks are probably 7, 9, 1, and 10. Not sure how it would hold up to big-time fans, but some of these tunes will probably be good live. Feels like there's probably a lot of sentiment tied to our general economic slump. I could pick up a little this time, imagine it would be good for further exploration.

Let me know what you think of this feature idea and the album. Andrew Bird will be coming soon and keep an eye on our Facebook and Twitter to vote for next week's selection.