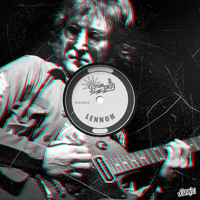 Rapper Bramzwig dropped a new single from his forthcoming mixtape Concrete Playground. It's called "Lennon" and it's a major dig.

"Look at him working, writing the words of a sermon that no one will hear."

Damn, what a line. I always find it interesting how taking something out of its normal context and putting it in somewhere new can make you understand it in an entirely different way. This song samples "Eleanor Rigby" by the Beatles, and of the times I heard the original, I never thought much about this lyric. But by placing it front and center of "Lennon," Bramzwig makes us notice. It perfectly captures how I often feel when writing these blog posts, and I'm sure it's something he identified with, too. However, rather than go negative or "why bother?", this is more about taking satisfaction in the craft and not caring about where it goes once it leaves you. The joy and passion to write, rap, and produce songs, those are enough. It's a great way to kick off a track that explores all the downsides of fame as an end itself.

What I love most about "Lennon" musically are the huge drums. After 30 seconds of the faint, sped-up Beatles sample, they kick in as Bramzwig starts rapping. Killer. The violins have a great mix of rhythm and repetitive melodic figures that lend themselves well to serving as the base of a rap song (something Talib Kweli also realized). Brawzwig lays down two verses that are packed with smart observations and make a strong case why fame – unless it's a byproduct of hard work and determined art – is not worth it. I really like in the second verse how you can hear his voice getting a little hoarse as he gets amped, almost even feel the spit when the words tumble out. It's an extra emotional element that makes the song more powerful. "Twist and Shout" went from a great pop song to a classic one because of the rawness in John Lennon's vocal performance. We get a little of that elevation here as Bramzwig lets the music carry his delivery.

It should only be a few more weeks until Concrete Playground is available. After this, I feel like it's not one to miss.