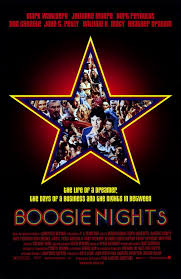 Today I kick off a series looking at the superb uses of music by director Paul Thomas Anderson. Over the next three weeks (in anticipation of his sixth feature The Master), I'll highlight some of my favorite moments in his films. We're starting with the Hot Traxx of Boogie Nights.

With all due respect to Anderson's quality debut, Hard Eight, the trend of memorable music in his films truly emerged in his second feature, Boogie Nights. Briefly, this great movie tells the story of the rise and fall of Eddie Adams, better known as Dirk Diggler (played by Mark Wahlberg), in the adult film industry of the San Fernando Valley circa the late 1970s and early 1980s, along with a brilliant ensemble of fascinating characters. The simple description doesn't do it justice, and for a film ostensibly about pornography, it's probably not quite what you'd expect.

The iconic and highly praised soundtrack is stacked with disco, soul, new wave, power ballads, and more. It's so full, two volumes were released and still not every track in the film made it! Right from the outset, with an amazing one-take long shot  (reminiscent of the classic Copacabana scene in Goodfellas) that introduces most of the main characters, we hear "Best of My Love" by The Emotions. The song serves as the clinching detail of an already impressive and authentic immersion into a specific time, place, and culture. Before the film ends, a viewer will hear Eric Burdon and Marvin Gaye, The Commodores and White Chocolate, Melanie, the Beach Boys, and more. All of it works very well. I wish I could give more of it attention, but I'm going to focus on one incredible scene: the Rahad Jackson "drug deal / robbery gone bad" sequence. Check it out below:

At this point, the film is well into the 1980s. Everyone is unraveling as the pre-video porn industry that made them famous disappears. Dirk has become heavily involved in drugs and lost his stature. He's reckless and increasingly desperate, which is why he's willing to go along with Todd's (Thomas Jane) risky plan to rob local drug dealer Rahad Jackson (played amazingly by Alfred Molina – this scene really is the Rahad show), with buddy Reed Rothchild (the awesome John C. Reilly) in tow. By now the music has progressed from its early emphasis on disco and soul to the power ballad rock and new wave. The scene is soundtracked diegetically by Rahad's mixtape (Volume 6!), meaning the music is directly heard and referenced by the characters, something I always dig.

My favorite moment is Rahad getting sucked into the build to the chorus of Night Ranger's "Sister Christian," the first song of three here. He gets caught up in the moment, cutting off conversation to air drum. I love these portrayals of how you can get so hooked on music you are moved to react. This has happened to me many times, and I particularly am a sucker for a good crescendo (not my usual taste of genre and style here, but still pretty sweet). [Quick digression, Episode 6 of Louie this season expertly used this song for a hilarious moment in a strip club. Maybe it makes every scene awesome?]

The music pulls the double duty of characterization. Rahad is a guy who gets swept up into things, who feeds off a high, whether supplied by cocaine, hair bands, or the adrenaline rush of shocking his guests with a harrowing round of Russian roulette. He goes with what moves him in the moment and always has a strong reaction, which is simple and relatable with his fondness for "Sister Christian," but it will later prove extreme and fatal for Todd. As the track ends, he shares that he likes to listen to music not in the order the band determines ("I hate that!") but the order he determines. It's a rant that probably rings true with a lot of listeners in our current era of mp3s, iPod shuffle, Spotify playlists, and Pandora stations.

The dynamics of the songs are important, too. In "Sister Christian," with its light verses and soaring choruses, we get a sense of ups and downs. This, plus the constant firecrackers set off by Cosmo the Chinese boy (love the offhand introduction), helps ratchet up the scene's tension. When the mixtape goes off and cycles to the other side, there is a brief silence, punctuated only by the erratic exploding bangs. In this moment, right after Rahad waved his gun around, the impending danger becomes palpable. Sure, we soon get the muted, even soothing, chords of "Jessie's Girl" by Rick Springfield, and Rahad gets even more into this track, singing along to the early verse and first chorus, adding his own little ad-libs, but none of it can dispel the fear.

After this, the camera focuses in on Dirk lost in his own world and holds awhile. It's perhaps off-putting but quite significant. Because nothing happens and dialogue from the others is muted, it's hard not to focus on the lyrics. For Dirk, the film's protagonist, as well as Todd, they seem to represent how each longs for something else. Todd has a yearning and lets it control him. He literally is trying to get something that belongs to another. Dirk obviously isn't taking his fall from grace well. However, I think we are watching him realize wanting what you no longer have when your world has changed can lead to some dark places. Perhaps the song voiced something he felt but couldn't say and he finally sees things as they are, not as he was used to or as he hoped. He'd been in a downturn that he refused to acknowledge, wishing Jessie's girl were his, as it were. But the folly of that is now clear, at least on a gut level that forces him to act to get out of the house. This critical moment begins his possible redemption and it can't be an accident that this song is playing.

Todd hasn't had this insight – the song might have given him the boost he needed to go through with the plan – and isn't ready to leave until he gets what's in the safe under the floorboards in the master bedroom. A gunfight ensues, and the final song in the sequence comes on: "99 Luftballoons" by Nena. This is a track with dynamics too, going from soft, almost a cappella, beginning to loud, in a way that perfectly mirrors the progression from Dirk and Reed's pleas to leave to Todd's showdown with Rahad to the latter's character shotgun rampage. Dirk and Reed narrowly escape, and the pop music stops as soon as they leave the house, a reminder of how the soundtrack was live for the characters.

An amazing scene unquestionably enhanced by music. This is true of the whole movie, but I find it most compelling here. Be sure to come back next week when I take a look at Magnolia.