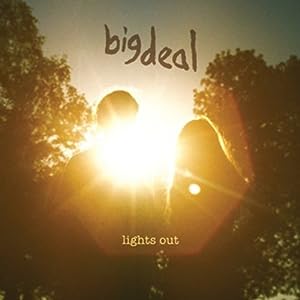 Tomorrow night, Big Deal will be making their US live debut at Glasslands. The duo will be touring behind their first album Lights Out, released earlier this year. I've been enjoying it a lot and am looking forward to seeing them live.

It's exciting to consider the chance to see a band play their very first ever show in the United States. Big Deal will also be hitting SXSW and Los Angeles, but it all starts in New York City with a night in Brooklyn and another in Manhattan. The show at Glasslands tomorrow March 11th starts at 8:30 PM and costs $12. Opening acts are 2:54 and ZAZA. Glasslands is at 289 Kent Ave in Williamsburg.

I've spent a lot of time listening to Lights Out since it came out in late January. I had been anticipating it highly since falling hard for their single "Chair" last fall (which also made my Top Ten Songs of 2011 list). It's a strong debut album that I really dig, but it may not be for everyone. Big Deal is a male-female duo, made up of Kacey Underwood and Alice Costelloe. Kacey is from California and Alice is from London, where the pair met. They both sing on every track and play an acoustic guitar and an electric guitar. To me, Lights Out is a cohesive, unified effort with a singular sound that works. The reason I say it may not be for everyone, though, is because if you don't happen to like that sound, there is really isn't enough variety to likely overcome that.

A reference point I would propose is Crazy For You by Best Coast. The albums do not sound the same – Best Coast channeled vintage California jangle-pop, Big Deal has a strong 90s alt rock bent – but each of these respective sounds dominate the albums and their pungent nostalgia is perfectly married to similarly helpless romantic, often heartbroken, lyrics. I can't help thinking of other duos too, like the White Stripes for how they were devoted to a specific sound, or She & Him for the gift of harmony Kacey and Alice clearly have as well. Essentially, you will know everything you need to know about this album from the first 20 seconds of opening track "Distant Neighborhood." An electric guitar line meshing with acoustic strumming, a sung-in-tandem verse, immediate wistfulness, it's Lights Out in a nutshell.

I'm particularly fascinated by Alice, or the character she evokes in song at least. It's the whole "too young to feel this old" idea. It feels like she's been through a lifetime of pain and she often conveys a very mature sense of clarity about her situations, but there is also  something so innocent and youthful to how strongly she feels things and how vulnerable and open she is. Sometimes I can't listen too closely or I just feel too heartbroken on her behalf – or remember moments in my own life that are similar. The middle section of the album might be the most powerful. "Homework" ties to childhood on title alone, and at first, it seems light with a message of "I can't concentrate" from thinking about you and my schoolwork is suffering, before suggesting deeper damage. "Talk" is an album highlight and incredibly devastating. The line "It's okay, I'm just a kid, It's okay, I'll get over it," and its delivery are the perfect distillation of the old-young dichotomy. And "All I want to do is talk, but seeing you fucks me up," is as painful a truth as it is beautiful. I also love next track "With the World at my Feet," for the contrast between good things to come, of real life beginning, with a matching soaring guitar line over a roaring wave, and the emptiness from the missing piece of a broken relationship. To have that unbridled optimism punctured by the resignation of "You don't have to say it's done. I know, I know" is a classic moment of growing up.

It can be hard to hear all this but it is also so easy to relate, which is why this album is a success. They have their sound and emotion down pat, and I think the album actually suffers a bit when they make some deviations, however slight, particularly toward the album's end. "Summer Cold" is a little too mellow and down tempo, and "Pi" a little too ambient. These songs reveal the rush of electric guitars is critical to keep things from getting too mopey or too ethereal. The energy makes the pain more bearable in the case of the former, and it also grounds the sentiment in the case of the latter. The content does make one wonder how much to read into the relationship of Kacey and Alice, if there's anything going on beyond just being friends and bandmates, but I don't think the specifics really matter. The strong authenticity of the sentiment is what I care about, not where that sentiment started. Either way, it certainly doesn't hurt that so much of the music is rooted in that golden wall-of-sound alt-rock guitar with acoustic texturing I love so much. You can't help thinking "Cool Like Kurt" is referencing Mr. Cobain and I think "Swoon" has a particularly 90s beginning with that slinky yet chunky guitar. It sounds plenty big for just two guitars and no drums.

I'm looking forward to hearing these songs live. If you aren't in the NYC, Austin, or LA regions, you should at least be sure to pick up Lights Out. I leave you with an excellent cover of "Sometimes Always" by the Jesus and Mary Chain.