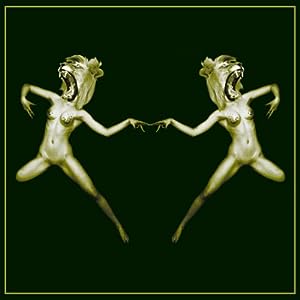 Not every musician makes their mark immediately. Nor does that mark always involve a deep and far-reaching creative sensibility. But with Yours Truly, Cellophane Nose, Beth Jeans Houghton & The Hooves of Destiny have made their presence felt, conveying their dynamic, whimsical, and compelling sound via an exciting listen.

I had been excited about this album ever since hearing "Dodecahedron" last spring (shared on TWD here, along with the video for "Liliputt" and a session performance of "Sweet Tooth Bird"). I am happy to say that Yours Truly, Cellophane Nose is a strong debut and it's pretty remarkable considering how young Beth is. At 21 it's very likely she will only get better. What I dig about it first and foremost is that it feels very personal, unique, and fully formed. I'm sure she's an artist that will keep pushing herself and trying new things, but Beth has definitely made a strongly realized and assured first effort.

It is hard to pin down an overall aesthetic musically; each track can be quite a shift from the last – or even internally, from a track's beginning to end. A lot of the soundscapes emerge out of a classical and cinematic tradition. Then there's diverse instrumentation, from plucking banjo to charging electric guitar. The intro of "The Barely Skinny Bone Tree" is a gorgeous a capella chant that sounds like it was recorded in a church. A song like "Carousel" waltzes and others like "Humble Digs" gallop. All of the experimentation and diversity provides a sense of exhilaration. I kept thinking about the songs as "decorated." Rather than a bare bones, unadorned structure, Beth has added many touches of different styles and genres, some of which may not be obvious choices, but seem to come from a place of curiosity and an urge to embrace diversity. It doesn't feel forced and is largely cohesive.

I felt a similar sensation listening to this album as I did with the wonderful Soviet Kitsch by Regina Spektor. Regina and Beth don't necessarily sound like each other, but they both have crafted delightful albums that radically mutate from song to song, all the while staying true to the inventive vision of their respective creators, who happen to female artists with eclectic taste, distinct, malleable voices, and high levels of artistry. Yours Truly is kind of like Beth Jeans' being Alice and taking us into her own personal Wonderland in a way. It feels big and magical.

The album also feels like a manifesto, an introduction of Beth to the world and how she sees herself in it. Not that all the "I" voices are her, but it's hard not to think of a moment like the chorus of "Atlas," – "Dissecting the atlas for places we've been, your list is longer but you've got more years than me" – as an acknowledgement of youth and a desire to accomplish a lot. In "Liliputt," the lines "Well don't ask me to stay for my feet won't oblige," and "I might die without these words having left my mouth" convey a sense of urgency to act, and "Veins" is a poignant portrayal of how sometimes the pursuits of personal desire may be contrary to maintaining a relationship. The writing is generally poetic, sometimes literally so, like the recitation on "Nightswimmer" that vividly depicts an oceanfront scene.

It is a rewarding album with much to discover and feels like the first of many classics to come from Beth Jeans Houghton and the Hooves of Destiny. You can purchase the album on Amazon, iTunes, or from Mute Records.