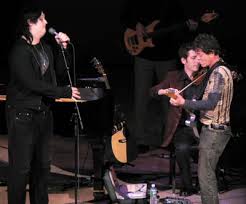 Velvet Underground Month was a pretty thorough undertaking. But I missed stuff. And even with a post to compile everything I missed, it turns out I still forgot something. In my mind, it happens to be a glaring omission, so I'm sharing it right now. The silver lining is that this song is so great it deserves its own post anyways. The song is "Fistful of Love" by Antony and the Johnsons, featuring Lou Reed.

As you can see from the picture above, late career (circa 2000s) Lou Reed has been a collaborator with Antony Hegarty, leader of Antony and the Johnsons. When Lou first heard Antony's voice, he recruited him to help with The Raven project. They've toured together. In 2005, Antony and the Johnsons released an album called I Am A Bird Now, which featured cover art depicting Candy Darling (the subject of the Velvet Underground song "Candy Says") and contributions from Lou on the track "Fistful of Love."

There are plenty of common ties between Lou and Antony that make them a natural match. They straddle the line between pop and avant-garde and they have been rooted in specific New York City art scenes that were both full of possibility and peril in equal measure. Most interesting to me is that both are artists unafraid to address topics others may shy away from – particularly when it comes to sexuality and gender – and yet often do so in a way that makes the controversial humanizing. Finally, both have quite distinct voices.

The term gets overused, but Antony's voice is a true original. It is filled with such rich and complex emotion it feels foolish to even try describing it. What is generally most evident, though, is its yearning, haunting melancholy, which seems an embodiment of life's pain. But it is also imbued with certain strength under the surface, that of a survivor and one who strives to affirm life. Antony's voice is absolutely incredible on "Fistful of Love." It was the main reason I was instantly hooked the first time I heard this. I love the way it transitions: it starts off more hesitant but still poignant, and then it proceeds to pick up steam over the course of the song, culminating with some breathtaking vamps that are utterly infectious and powerful. He puts so much soul into every line and gets totally swept up in the music and the sentiment of the song. It's like a diva moment, and he clearly relishes the performance (which makes me think a female artist needs to cover this, it's a song that offers so much to someone with a strong voice. Perhaps Beyonce could return the favor after Antony did "Crazy in Love?").

The build and release in the music and in Antony's voice make "Fistful of Love," feel triumphant, a powerful declaration of love. However, thinking about the title and actually listening to the words, one would be hard-pressed to label them as positive. "I tell you I love you and I always will" precedes "And I know you can't tell me." The chorus goes, "I feel your fists and I know it's out of love." One might read physical abuse from this, or, at the very least, a one-sided and damaging relationship where the narrator is delusional to some harsher reality. That's the beauty of the song, though. You can hear it as a devastating portrayal of someone in a horrible situation, yet there is something undeniably empowering about the delivery and sound, making it possible to have multiple interpretations.

Lou's contribution is a spoken word intro that is a strong echo of the spoken passage in "I Found a Reason" (on Loaded), plus some impressive guitar work. He initially holds down a nice rhythmic riff, but eventually cuts loose with distorted squall that adds to the dynamism of the choruses. I can see why Lou might have jumped at the chance to play on this. It is rich with that big soul, doo-wop sound he loved as a young man and often flirted with throughout the Velvet Underground days.

The music of the track is such a wonderful pairing with Antony's voice. The piano and guitar on the verses are nice, but what I really dig the most are the drums and horns. The drumming is mainly the steady force that holds everything together while also nudging it along – notice how it becomes stronger right around the first chorus and stays that way for the remainder. It's nothing too flashy, but it is impossible to imagine "Fistful of Love without this beat. The horns are absolutely killer. I love how they don't come in on the first beats of the measures during the "I feel your fists" part. There's a clear pause that gives them an extra bit of emphasis when they do come in. I also like "Straight through the heart" stutter, and the melodic figures they start doing right after that line are so perfect – and become a good foil for Antony when his voice takes off into the stratosphere later.

Overall it is truly magnificent: an amazing vocal performance with a superb backing band on a track that is both painful and celebratory. I suppose that's how love often feels and why this song is so captivating. I dig it.