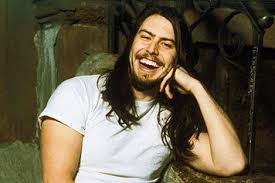 Tomorrow Andrew W.K. embarks on a special headlining tour to commemorate the 10th Anniversary of I Get Wet. He'll be performing the album in its entirety. To mark the occasion, I am inducting "She Is Beautiful" into the Shrine of Dig. It is time to party, so we will party hard!

The link above contains all the tour dates, check and see if Mr. W.K. will be bringing his night of revelry to your city. This tour excites me. If I haven't already on Those Who Dig, I want to take a moment to go on the record as a fan of artists playing entire albums live. I can see how some might criticize this practice for removing spontaneity and unpredictability from live sets and I get the whole "Why pay to go see an album when I can just listen to it?" argument. However, these shows tend to have multiple sets, or at least one long set that includes other material, so there's room for surprise there, plus the live setting is always a different animal no matter if you know what you are going to hear or not.

Andrew W.K. has a wild, fun-loving reputation so it's very hard to imagine any legitimate threat of dullness. Also, I Get Wet lends itself naturally to a crazy performance. The record has always staggered me in its volume and energy. It seems a little ridiculous and inappropriate to put it on headphones or play around the house; it needs room to explode. The live setting will be a blissful pounding. It's essentially made to be heard at the loudest level, like the difference between seeing a tiger at the zoo versus a tiger face-to-face in the wild. Only in this case, the tiger wants to maul you with an insatiable urge to party.

The music on I Get Wet is quite literally sonic adrenaline. Everyone is probably familiar with "Party Hard" and its incessant yawp to do exactly what the title indicates. The whole album has volume cranked to ten, has tempos that are pedal to the floor, and not singing so much as constant shouting. The lyrics are economical, brief maxims almost zen-like in their complete devotion to having as much fun as possible. You listen to shed all awareness of dullness and a staid existence, to become one with the celebration. I don't think there's a single minor note on any of the twelve tracks and every one of them has buzz saw hooks hitting at full bore. Nothing about it has ever seemed ironic or insincere, which is the secret to its success. It may not be deep or diverse, but it absolutely has its place as a worthwhile piece of music.

Andrew W.K. – She Is Beautiful

The standout for me has always been "She Is Beautiful." There ultimately isn't much to distinguish it from the other eleven cuts on the album, but this one is about girls specifically and it just might to have a little bit stronger a sense of dynamics, of ebb and flow (relatively speaking) that makes the highs all the more potent. It's a roller coaster, which works well for the jittery nature of that moment when you see a beautiful girl and want to connect with her. I love how it sounds and what it says. I have very fond personal associations with it too. During high school one of my best friends and I would often spend hours meandering the back roads of Erie County, discussing our lives, cracking jokes and of course, rocking out to many great tunes. Our favorite is undeniably "She Is Beautiful."

The car is a perfect place to listen to Andrew W.K. because being in motion offers an outlet for converting the potential energy that jacks your system to kinetic. We found that even driving wasn't enough, though, so we began to develop a performance piece. And by performance piece, I mean that we played air guitar and air drums and sang at the top of our lungs. It's the way Andrew W.K. intended, I just know it. My friend, who was often the driver, took lead vocals and handled the guitar. It's a fun guitar part, between the rapid-fire volleys early on and the infectious ascending figure that makes up the verses. A hidden benefit of the song is that its powerful, all-consuming rush masked the chance I may have questioned how good an idea it was to be in a car with someone speeding along twisting dirt roads at night with his hands frequently off the wheel. Whatever, don't stop living in the red, am I right?

I was the drummer and held down the backing vocals. You know, the second "She is beautiful's," or the "Na Na Na Na's," or a leading "She looks good…" Whatever was necessary, really. Let me tell you, I have yet to find a song that is more fun to air drum. What I love is that it takes some time to build up a bit. You start with that hi-hat, then comes the kick drum, and before you know it, you have launched right into a full-on pounding of your invisible kit. This process doesn't occur just once, either, which is great. Second, it's not that complicated. It's 4/4 and a straightforward pattern. Even a terrible drummer like me can handle it. And yet, there are still some opportunities for improvisation. I like to occasionally twirl an air-stick and have even been known to put one in my mouth during the breakdown and rebuild section that starts around the 2:35 mark. The way that the drums re-enter here is my absolute favorite moment of the song. An all-timer.

My friend and I would often talk about girls on these rides, usually about our lack of success and deep befuddlement. Besides it being so kick ass, I know this song means a lot to me because it gave me that rare thing: a feeling of confidence, that anything was possible in this particular realm where I was so unsure. In the three and a half minutes, I was transformed. I could stop being shy or afraid, I could talk to any girl I wanted, and it could be effortless and natural. It's an unbelievable sensation, and honestly, not many songs capture it so fully and purely. Granted, most of these moments happened out in the middle of nowhere and I rarely could channel the sentiment when I was actually around girls and in the heat of the moment, but nevertheless, the song was important and wonderful and it simply has to be enshrined. Feel free to let me know what songs have produced such an instantaneous burst to you.

I should also mention my brother and I enjoyed driving up to this ultra-exclusive neighborhood and blasting "She Is Beautiful" with our windows down. It was fun because the neighborhood was literally just a small circle, so we'd spin around and around, emitting waves of fantastic jubilation to what we imagined were boring, uptight blue blood-types. I like to think we made a difference and brought the teachings of Andrew W.K. to someone who might have never encountered it otherwise. Probably wishful thinking, but I do know my brother and I had a great time doing it.

I'm posting the video below, it's enjoyable. Once again, the tour dates are here. We might have some more coverage of the tour in the next month, closer to the NYC (I love…New York City! Oh yeah…New York City!) date, and maybe some other surprises as well. In the mean time, party 'til you puke!